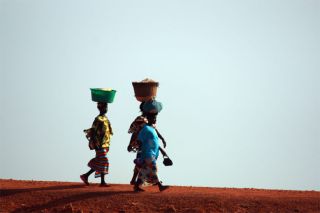 Despite the common wisdom that women of Africa find it easy to carry items on their heads,  new research suggests doing so is actually a pain in the neck and no more efficient than other methods.

Apparently the women do so mostly out of necessity, when they might need their arms to help travel over difficult terrain.

The findings of scientists in Scotland and South Africa contradict research conducted about 25 years ago that suggested the technique of resting items atop the head was significantly more efficient than carrying them by hand or in a backpack, and that African women could effortlessly carry loads up to a fifth of their own body weight in such a manner. One explanation was that part of the energy that went into lifting the load could be converted into energy used for traveling.

"As a sport scientist living in Botswana for eight years, I was fascinated by the ease with which the women seemed to carry very heavy loads such as firewood and water on their head," recalled Ray Lloyd at the University of Abertay Dundee.

Lloyd noted the original studies of head-carrying were based on four to six women, "so I wanted to confirm this with a bigger group. However, my results suggest quite the opposite — that head-loading is no more efficient than other methods, and is very painful for the women."

Working in laboratories at South Africa's Cape Peninsula University of Technology, Lloyd led a team of scientists analyzing 24 women from the Xhosa people as they carried loads in different ways. These included 13 women with more than 10 years of head-carrying experience and 11 with no experience at all, who were studied as they walked on treadmills either with no loads, loads on their backs, or loads on their heads.

Also taking part in the experiments were nine British women from the British Territorial Army with lots of experience carrying weight in backpacks but no experience with head-carrying.

None of the women found carrying items on their heads any easier — they consumed roughly the same amount of oxygen (an indicator of expended effort) as when they carried loads on their backs. Head-carrying also did not get easier with practice. "Previous experience of head-carrying did not seem to offer any benefits, and some women with no experience were the most efficient at head-carrying," Lloyd said.

"It also didn't seem to protect against pain and discomfort," he added. "We interviewed the women, and all the experienced head-loaders reported that neck pain was a big problem for them. They reported having to give neck massages to their mothers and grandmothers whenever they returned from fetching water."

"All the women agreed that they would prefer an alternative method of transporting essential items such as water and firewood," Lloyd concluded. He said he and his colleagues are now investigating whether head-carrying leads to long-term damage of the neck.

"Can the fore-aft movement of the trunk be optimized, and can this be designed into commercially available systems?" Lloyd said to LiveScience.

The scientists detailed their findings in the July issue of the journal Applied Ergonomics and in the February issue of the European Journal of Applied Physiology.