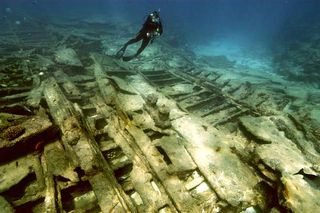 "The Dunnottar Castle is an incredible heritage resource from the days of the sailing ships like the Falls of Clyde, Balcalutha and Star of India, when our maritime commerce was driven by steel masts and canvas, and by wind power and human hands," said Hans Van Tilburg, a National Oceanic and Atmospheric Administration marine archeologist.

NOAA researchers working from the ship Hi'ialakai confirmed the wreck's identity following its initial discovery by a volunteer with the state of Hawaii division of forestry and wildlife, Brad Vanderlip.

Home ported in Scotland, the Dunnottar Castle was bound from Sydney, Australia, to Wilmington, Calif., with a load of coal when it struck a reef at full speed.

During the recent 28-day expedition, marine archaeologists with the NOAA Maritime Heritage Program also investigated other shipwrecks, including a 19th-century American whaling ship and a U.S. Navy side-wheel steamer lost in 1870.