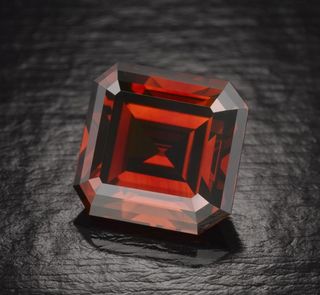 The Kazanjian Red Diamond, one of only three red diamonds over five carats, is on display at the American Museum of Natural History.
(Image: © Tino Hammid, Los Angeles.)

NEW YORK — Among colored diamonds, red is particularly rare, and mysterious, since no one knows for certain the origin of the color within the stone.

One of the three known red diamonds weighing more than 5 carats (1 gram), an emerald-cut stone about the size of a small fingertip rests against a gray background in an American Museum of Natural History display case. This stone, known as the Kazanjian Red Diamond, has a dark hue resembling that of a garnet or a ruby, and in its nearly century-long history, it has been mistaken for the latter.

The square-shaped diamond is about 0.39 inches (10 millimeters) on each side and 0.23 inches (6 mm) deep. [Image of Kazanjian Red Diamond]

Like other brightly colored diamonds – including intense yellow canary diamonds and blue stones – the red Kazanjian is more rare and prized than even colorless stones. (Colorless stones become less valuable the more of a yellow or brown tinge they carry.)

"What people are looking for are vivid colors," George Harlow, the museum's curator of Earth and Planetary Sciences Department, told LiveScience. "Brown as a gemstone doesn't grab people's fancy."

However, red stones, technically considered to be an intense variety of pink diamond, may get their color in a way similar to that of the less valuable brown diamonds. Diamonds are made up of carbon atoms bonded together, but among the brown diamonds, scientists have found gaps in this structure, called vacancies, which they have linked to bands, or graining, visible in brown diamonds. Researchers also think nitrogen atoms contribute to the brown color.

Because red diamonds also have graining, these vacancies, as well as nitrogen, are theorized – but not confirmed – to play a role creating the red color as well, Harlow said.

The Kazanjian Red Diamond, on display at the museum through March 13, was unearthed in South Africa in the late 1920s, according to Ian Balfour's "Famous Diamonds" (Antique Collectors Club, 2008). After changing hands, it arrived in Amsterdam where the Goudvis brothers and their master cutter began attempting to carve what at the time was an unpromising-looking rough stone.

After seven months of studying and polishing it, the jewelers arrived at the final emerald cut. A much smaller emerald-cut diamond was also cut from the stone. The Goudvis brothers attempted, unsuccessfully, to sell the stone. But in 1944, the Nazis occupied the Netherlands and confiscated all valuables, including the stone. After the war, it resurfaced in a salt mine near Hitler's retreat in Berchtesgaden, Bavaria, where an American general mistook it for a ruby.

In debt, the Goudvis brothers' heirs sold the diamond, and, eventually, its whereabouts were lost. In 2007, the firm Kazanjian Brothers purchased the red diamond after realizing that it was the missing stone. Harlow declined to discuss the value of the stone or the security in place to protect it.