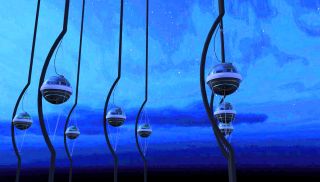 An illustration shows what the interior of IceCube might look like without the ice.
(Image: © Jamie Yang, IceCube Collaboration)

Where do neutrinos get their mass from? It's a mystery, one of the most baffling in the Standard Model of particle physics. But a team of physicists think they know how to solve it.

Here's the problem: Neutrinos are weird. Ultra-faint particles, most of them are so low-energy and insubstantial that they pass through our entire planet without stopping. For decades, scientists thought that they had no mass at all. In the original version of the Standard Model, which describes particle physics, the neutrino was utterly weightless. About two decades ago, that changed. Physicists now know that neutrinos have mass, albeit in miniscule amounts. And they aren't sure yet precisely why that mass is.

We can solve the mystery though, a new paper published Jan. 31 in the journal Physical Review Letters argues. Given enough time and data, the highest-energy neutrinos we can already detect should help unlock the secrets to their mass.

Neutrinos come with different amounts of energy: Two otherwise identical particles will behave very differently depending on how much energy they carry.

Most of the neutrinos we can detect come from our sun and a handful of super-bright energy sources on Earth (like nuclear reactors), and are relatively low energy. And low energy neutrinos slip through chunks of matter easily, without banging into anything. But our planet is also bombarded by much higher-energy neutrinos. And these are much more likely to bang into other particles, like a tractor trailer screaming down the highway in the passing lane.

Back in 2012, a particle detector came online in Antarctica that is designed to detect those higher-energy neutrinos. But the detector, named IceCube, can't sense them directly. Instead, it looks for the aftermath of high-energy neutrino collisions with water molecules in the surrounding ice — collisions that produce bursts of other kinds of particles that IceCube can detect. Usually those bursts are messy, producing a variety of particles. But sometimes they're unusually clean — the result of a process called resonance, said study co-author Bhupal Dev, a physicist at Washington University in St. Louis.

When a neutrino slams into another particle, specifically an electron,,e it will sometimes go through a process known as Glashow resonance, Dev told Live Science That resonance mashes the two particles together and turns them into something new: a W boson. First proposed in 1959, Glashow resonance requires very high energies, and a single example may have turned up in IceCube in 2018, according to a 2018 talk at a neutrinos conference.

But according to Dev and his co-authors, there may be other types of resonances out there. One of the more popular theories of how neutrinos get their mass is known as the "Zee model." And under the Zee model, there would be another type of resonance like Glashow, producing another new particle, known as the "Zee burst," the researchers wrote in the new study. And that resonance would be within IceCube's ability to detect.

If a Zee burst were detected, it would lead to a radical update of the Standard Model, completely transforming how physicists view neutrinos, Dev said.

The Zee model would go from a theory to firm science, and the existing model of neutrinos would be thrown out.

But IceCube is only sensitive to certain ranges of neutrino energies, and the conditions that would produce Zee bursts are on the outer edges of that range. Given time, one such incident will likely be detected by IceCube at some point in the next 30 years.

But fortunately, updates to IceCube are coming, the researchers noted. Once the detector is upgraded to the much larger and more sensitive IceCube-Gen 2 (it's not clear exactly when this will happen), the more sensitive device should be able to pick up a Zee burst within just three years — if Zee bursts are really out there.

And if Zee bursts aren't out there, and the Zee model is wrong, the mystery of the neutrino mass will only get deeper.