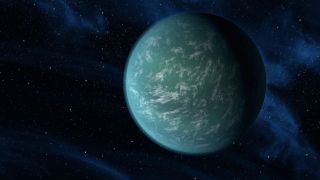 An artist's depiction of a super-Earth exoplanet.
(Image: © NASA/Ames/JPL-Caltech)

Scientists suspect they have identified an intriguing new alien planet in a particularly roundabout way.

The planet is eye-catching because it bears some eerie similarities to Earth, but also some stark differences. In terms of size, the scientists believe the world is about four times Earth's mass. The planet's star is a dim dwarf star, perhaps even a brown dwarf, or "failed star." The planet's year lasts about 617 Earth days, even though its orbit falls somewhere between those of Earth and Venus around our sun.

But the team of scientists that discovered the new alien world didn't observe it directly. They didn't even spot it by identifying how it interacts with its star. Instead, the researchers found the planet because of the way it and its star warped and magnified light, like a lens — a phenomenon called gravitational microlensing.

Gravitational microlensing relies on the fact that massive objects warp the space around them. When a telescope, a massive object and a target line up in just the right way, the massive object warps the light emitted by the target, magnifying it. It's a very uncommon event — just one in one million stars are being lensed at any given time, according to a statement about the new research from the University of Canterbury in New Zealand.

To find this new planet, scientists combined microlensing observations gathered by two facilities: the Optical Gravitational Lensing Experiment based in Poland; and the Korea Microlensing Telescope Network, which consists of a trio of instruments in Chile, South Africa and Australia.

Scientists can use the precise details of microlensing observations to calculate what acted as the lens — usually, a single star. But by analyzing the brightness of the target when it was microlensed versus when it wasn't, the scientists realized that the lens was actually a system, not a lone star. The feat required poring through five days of data to isolate five hours of relevant observations, and then confirming that an instrument fluke wasn't to blame for the unusual finding.

The result was a basic description of the distant star system: A star one-tenth the mass of our sun and a planet perhaps four times the mass of Earth — making it a super-Earth or a sub-Neptune — that circles its star between the orbital distances of Venus and Earth. That's an exciting combination because among the thousands of exoplanets scientists have identified to date, such worlds in such orbits are pretty rare, according to the statement.

The research is described in a paper published May 7 in The Astronomical Journal.