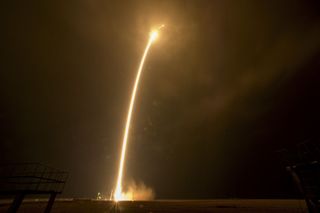 Let's look back on some spaceflight highlights of 2019.

Related: The Private Spaceflight Decade: How Commercial Space Soared in the 2010s

In March, NASA got one step closer to achieving its goal of launching U.S. astronauts on American vehicles again when SpaceX launched the first uncrewed demonstration flight of the company's Crew Dragon spacecraft to the International Space Station.

The vehicle made a flawless approach to the station and berthed with the orbiting complex for a brief visit before returning to Earth. However, the Crew Dragon later caught fire during a test of the capsule's abort engines, which would carry a crew to safety in the event of an anomaly during launch; SpaceX has since fired the same engines on other capsules without incident.

Boeing's Starliner crew capsule made a similar launch on Dec. 20 but failed to dock with the International Space Station, rounding out a year full of commercial crew preparations. NASA recently came under criticism from the agency's Office of Inspector General because of continuing delays in the program's crewed flights.

China lands on moon's far side

China's Chang'e 4 lander and Yutu 2 rover made an epic landing on Jan. 3 at Von Kármán crater on the far side of the moon. The mission marks the first time that any spacecraft has soft-landed on the moon's far side. It's a challenging feat because the moon blocks signals to our planet, so these vehicles require supplemental satellite relays to stay in touch with Earth.

The lander and rover are still going strong after nearly a year on the lunar surface, sending back pictures and data for astronomers. The rover has examined an interesting substance on the moon that may be volcanic glass; the lander carried the first plant to sprout on the moon's far side.

Related: Chang'e 4 in Pictures: China's Mission to the Moon's Far Side

NASA astronauts Christina Koch and Jessica Meir made history on Oct. 18 when they performed the first all-female spacewalk. Although women have been doing spacewalks since 1984, this was the first time that two women conducted a spacewalk together. The pair worked on some tricky batteries attached to the space station's exterior.

Rookie astronaut Koch got other exciting news early in her mission, when NASA crew reassignments in April meant that her stay on the space station would be extended to nearly a year in space, at 326 days — the longest-ever single spaceflight by a woman. She will return to Earth in February.

The schedule-juggling was primarily meant to make room for a weeklong mission by Hazzaa Ali Almansoori, the first astronaut from the United Arab Emirates, on a seat purchased from the Russian space agency, Roscosmos.

The extended mission also offers NASA an opportunity to gather more data on how the human body reacts to long-duration spaceflight, following the 340-day mission of NASA astronaut Scott Kelly and Russian cosmonaut Mikhail Kornienko in 2015 to 2016.

The nonprofit organization The Planetary Society successfully deployed a solar sail in space when it launched its LightSail 2 mission to Earth orbit on July 8. The solar-sailing spacecraft successfully unfurled its sail in late July and is still sending data back to Earth about the spacecraft's performance in orbit.

The long-term dream for solar sailing is to send spacecraft to more distant destinations — perhaps even beyond our solar system — using minimal fuel. LightSail 2 follows LightSail 1, a smaller demonstration test that The Planetary Society completed in 2015, as well as Japan's Ikaros, which became the first successful solar-sailing mission in 2010.

Related: A Solar Sail in Space: See the Awesome Views from LightSail 2

SpaceX unleashed two prototype vehicles for Starship, its massive, and perhaps Mars-bound, vehicle. First, the company unveiled the miniature, single-engine Starhopper in March. The hopper conducted a series of three vertical takeoff and landing tests, with the flights peaking at several hundred feet in altitude.

The next test vehicle, a full-size Starship model, blew its top during a cryogenic pressure test on Nov. 20 at SpaceX's facilities near Boca Chica in south Texas. SpaceX representatives said the company plans to create more advanced prototypes instead of repairing and retesting this first prototype.

SpaceX launched its first two installments of the Starlink constellation, which now includes 120 satellites in space. The company hopes to eventually launch up to 42,000 of these devices.

Those grand plans have concerned spaceflight experts who are worried about orbital debris, even though SpaceX has said these vehicles are equipped with sensors to dodge trouble. (In September, the European Space Agency had to move one of its weather satellites to avoid a potential collision.)

SpaceX has also been criticized for how reflective these satellites are; astronomers say it could interfere with their views. The company plans to test an anti-reflective coating on future Starlink devices as it ramps up its launch frequency in 2020.

The orbiter component of India's Chandrayaan-2 mission made it to the moon with no issues, but the same cannot be said of its lander, Vikram, which crashed into the surface during a soft-landing attempt on Sept. 6.

In November, the Indian government said that issues with the braking thrusters contributed to the issue that led to Vikram's crash. The Indian Space Research Organisation spent two months investigating the landing and trying to reestablish contact with the lander before making its assessment that Vikram had indeed crashed.

Related: India's Chandrayaan-2 Mission to the Moon in Photos

In March, India unexpectedly tested an anti-satellite missile, becoming the fourth country with such a capability. The test, dubbed "Mission Shakti," destroyed an Indian satellite in low-Earth orbit and created a cloud of debris, which spaceflight experts worried may cause damage to intact spacecraft.

Spacefaring countries worry about the spread of anti-satellite technology, since there's no reason a country with such skills can't turn them against expensive, sensitive satellites owned and operated by other countries.

Israel also showed how challenging moon landings are, when its privately funded Beresheet robotic lander also crashed during a landing attempt in April. Mission control lost communication with the spacecraft, which was built by SpaceIL and Israel Aerospace Industries, when it was 489 feet (149 meters) above the lunar surface.

SpaceIL plans to go to another destination for its next mission, but as of a June announcement, the company had not revealed where.

Related: This Is the Last Photo Israel's Beresheet Moon Lander Ever Took

NASA's first human moon landing 50 years ago came into focus in July, when the agency held numerous events to mark the anniversary of the historic feat by the Apollo 11 crew and some 400,000 workers who made it happen.

Meanwhile, NASA is still working toward its aim of landing humans on the moon in 2024, including readying the first Artemis program mission, an uncrewed loop around the moon, for launch in 2021. The agency is working to raise support domestically and among international partners to sustain the needed funding to meet the deadline that was set by the Trump administration in March.

It was also a busy year for Virgin Galactic, which achieved numerous milestones leading to its attempt to fly the first paying passengers aboard SpaceShipTwo in 2020. The company went public, unveiled its spacesuits and officially moved test flights to its permanent home at Spaceport America in New Mexico.

Virgin Galactic also carried its first passenger, astronaut trainer Beth Moses, on a flight to begin understanding the experience its customers will experience. It "was silent and beautiful and clear, and I was quite happy to be near the cockpit with our pilots, to celebrate apogee," she said shortly after the flight. "And we all sort of marveled at how magic it was."