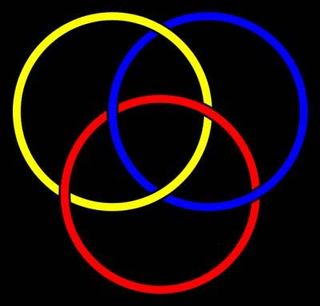 The Borromean rings, a symbol dating back to the second century, were recreated with lithium atoms.
(Image: © Wikipedia)

When physicist Vitaly Efimov heard his theory had finally been proven, he ran up to the younger scientist who had verified it and gave him a high five.

Efimov had predicted a quantum-mechanical version of Borromean rings, a symbol that first showed up in Afghan Buddhist art from around the second century. The symbol depicts three rings linked together; if any ring were removed, they would all come apart.

Efimov theorized an analog to the rings using particles: Three particles (such as atoms or protons or even quarks) could be bound together in a stable state, even though any two of them could not bind without the third. The physicist first proposed the idea, based on a mathematical proof, in 1970. Since then, no one has been able to demonstrate the phenomenon in the lab — until recently.

A team of physicists led by Randy Hulet of Rice University in Houston finally achieved the trio of particles, and published their findings in the online journal Science Express.

"It was very exciting, because after 40 years of this prediction being out there, it was finally verified," Hulet told LiveScience.

Hulet presented his work at a meeting in Rome in October that Efimov also attended.

"He gave me a high five after my talk," Hulet recounted. "He was so enthusiastic and so excited to see this prediction become true."

Efimov had calculated that the triplet of bound particles was possible, and that it was repeating: New bound states could be achieved at higher and higher energy levels in an infinite progression. All of the bound states would occur at energy levels that were multiples of 515.

To prove that they had really created the trios, called Efimov trimers, the researchers produced one set of  three lithium atoms bound together, and then reproduced it with a binding energy 515 times the first one. (Essentially, binding energy indicates how tightly the particles hold onto one another and how much energy it would take to pull them apart.)

The researchers used a setup called a Feshbach resonance that allowed them to tweak the energy levels of their atoms. They found that when they hit multiples of 515, the particles would bind, but at other energies they wouldn't, proving that the trios really were Efimov trimers.

"It's an amazing effect, really," Hulet said. "A lot of people didn’t believe [Efimov] at first. It was a very strange prediction."

The theory is unique because it's a solution to a special case of what's called the "three-body" problem. Scientists have solved the "two-body" problem — that is, they have calculated exactly how two objects should move based on their starting positions, masses and velocities. Scientists can also calculate this scenario for many masses, but a pure solution to the general three-body problem has been elusive.

The Efimov calculation isn't the solution to the general case, but rather a solution to a specific case of three bodies. Thus, discovering a real-life example of three particles fulfilling his prediction is an important step to learning more about few-body physics.