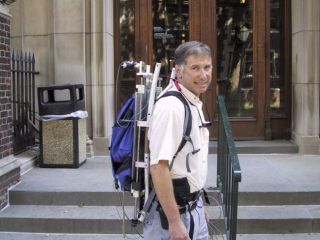 Scientists have built a backpack that turns the spring in your step into electricity for your cell phone. And, they say, it's more comfortable than the average backpack.

This device would allow soldiers, rescue workers, and field scientists – all of whom use several electronic instruments such as cell phones and GPS locators – to leave bulky and heavy replacement batteries at home.

Inventors designed the backpack to make use of the natural up-and-down motion of a person's stride to generate electricity, either for immediate use or for storage.

The backpack consists of two main parts – a rigid frame strapped to the wearer's back and a load plate suspended from this frame by springs. As the person walks along, the load plate slides up and down the frame.

Attached to the load is a toothed bar that turns the gear of a generator affixed to the frame. As the bar turns the generator's gear, it generates up to 7.4 Watts – enough juice to simultaneously power an MP3 player, a PDA, night vision goggles, a GPS locator, and a cell phone.

"The beauty of the system is the weight you are carrying around with you anyway serves as the mass to drive power generation," Rome told LiveScience.

A typical soldier's pack carries 80 pounds of gear, with as much as 20 pounds devoted to batteries.

The device – based on the metal frame once popular in hiking packs – adds just six pounds the normal backpack. Rome says that number will come down in future designs.

"Field researchers, for example, have to carry many replacement batteries to power their equipment, which take up a lot of weight and space in the pack," Rome said. "The Suspended-Load Backpack could help anyone with a need for power on the go, including researchers, soldiers, disaster relief workers or someone just looking to keep a mobile phone charged during a long trek."

Rome and his colleagues fitted backpacks of different loads to six male subjects and measured their metabolic rates and gaits as the subjects walked on a treadmill. The backpack altered the subjects' gaits, causing them to walk more efficiently and burn less energy.

The springy pack also decreased the amount of force placed on the subjects' shoulders, making the bag more comfortable. Because of this unexpected find, this technology could one day be a part of everyday packs.

"We are working on parallel development of ergonomic backpacks for everyone – from school children carrying heavy bags of books, a worldwide public health problem, to the normal backpack used to carry laptops, to hikers' backpacks to military and explorers," Rome said. "Everyone can benefit from a more ergonomic backpack."

This invention is detailed in the Sept. 9 issue of the journal Science.