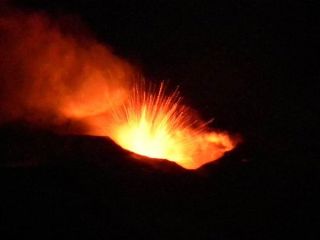 Mount Etna, the famous Sicilian volcano, turned on the fireworks Wednesday (Jan. 12) as it shot lava hundreds of feet into the air.

Volcanic tremors at Mount Etna, on the Italian island, were detected around 21:00 GMT (4 p.m. EST) on Jan. 11. The tremors peaked the next morning and lava began erupting at the Southeast Crater, about 4,500 feet (1,375 meters) high. The crater pit overflowed with lava and ash plumes spewed into the air, which forced a local airport to halt service. The ash plumes had stopped by about 3:30 p.m. local time today (Jan. 13), according to the Italian Institute of Vocanology (INGV), citing surveillance cameras observing Etna.

But more eruptions could be on the way, scientists said.

"This eruption is very similar to more than 200 episodes of lava fountaining at the summit craters of Mount Etna — including 66 from the Southeast Crater in the year 2000," said Boris Behncke, a volcanologist and expert on Mount Etna. "The same vent that erupted last night already produced nearly identical — though longer-lasting — episodes in September and November 2007 and most recently on May 10, 2008."

Etna is the largest active volcano in Europe and one of the world's most well-known. While 2010 was an exceptionally calm year for Etna, it is nearly constantly active and there is rarely a full year that passes without some eruptive activity on Etna, Behncke told OurAmazingPlanet.

"We expected Etna to return to activity in this period," Behncke said. "There had been lots of premonitory signals."

"We expected further episodes at similar intervals, and also thought they would get stronger with time," Behncke said. "Things did accelerate maybe a tiny little bit faster than we had imagined, but the evolution was very logical, and again, very similar to many events in the past."

At a height of 10,900 feet (3,328 meters), Etna looms over the city of Catania. As active as the volcano is, it's not a pressing danger to locals, and no damage or injuries were reported or expected from yesterday's eruption. Etna's most violent eruption was in 1669, when 15,000 people were killed.

The eruption is what's called a strombolian explosion, named after the nearby volcano of the same name that has been erupting for hundreds of years. Bursting gas bubbles within the magma drive these explosions, which eject lava tens to hundreds of meters into the air from a single crater. These episodes happen every few minutes, rhythmically or irregularly. The lava fragments — volcanic bombs — are rounded as they fly through the air.

The ancient Greeks believed Mount Etna to be the home of Vulcan, the god of fire. To them, Mount Etna erupting merely meant Vulcan was forging weapons for Mars, the god of war.