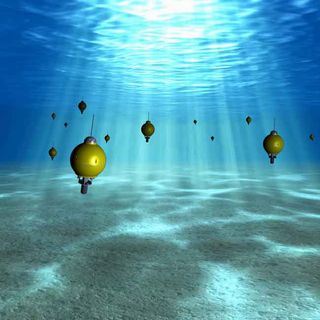 This digital image shows how autonomous underwater explorers (AUEs) will be used to provide new information about the oceans.
(Image: © SIO)

Swarms of soup-can-sized robots will soon plunge into the ocean seeking data on poorly understood phenomena from currents to biology.

With $2.5 million in new funding from the National Science Foundation, researchers at the Scripps Institution of Oceanography will create and deploy fleets of autonomous underwater explorers (AUEs) to explore the depths. Tens or hundreds of pint-sized robots would be deployed along with one the size of a soccer ball, in setups repeated wherever they are needed.

"AUEs will give us information to figure out how small organisms survive, how they move in the ocean, and the physical dynamics they experience as they get around," said Scripps researcher Peter Franks. "AUEs should improve ocean models and allow us to do a better job of following 'the weather and climate of the ocean,' as well as help us understand things like carbon fluxes."

Researchers have some pretty good data on the ocean as a whole, but many localized phenomena are not well understood.

For marine protected areas, AUEs will help inform debates about the best areas for habitat protection. With harmful algal blooms and oil spills, the instruments can be deployed directly into outbreak patches to gauge how they develop and change over time. In the case of an airplane crash over the ocean, AUEs should be able to track currents to determine where among the wreckage a black box may be located.

"AUEs will fill in gaps between existing marine technologies," said Scripps researcher Jules Jaffe. "They will provide a whole new kind of information."

Franks, who conducts research on marine phytoplankton, says that "plankton are somewhat like the balloons of the ocean floating around out there. With AUEs, we're trying to figure out how the ocean works at scales that matter to plankton.

"If we place 100 AUEs in the ocean and let them go, we'll be able to look at how they move to get a sense of the physics driving current flows."

During the pilot phase of the project, Jaffe and colleagues will build five to six of the soccer-ball-sized explorers and 20 of the smaller versions. An outreach component of the project will enlist school children in building and ultimately deploying AUEs.