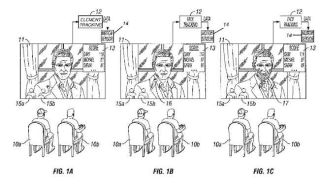 Interactive TV could someday allow viewers to take part in the on-screen action, if Sony's patent filing earlier this year suggests anything. Other interactive TV plans would have you racing real drivers in real races from the comfort of your couch.

The patent includes mini-games that would allow viewer-controlled avatars to toss virtual tomatoes or give B-movie actors a swift kick in the pants.

Sony's patent relies on a type of interactive overlay for TV shows or movies, perhaps generated by a video game console such as Sony's PlayStation 3. Typically passive TV watchers could then use virtual avatars to interact on-screen as the TV show or movie action plays out behind them.

The idea takes direct inspiration from the venerable "Mystery Science Theater 3000," a comedy TV series from the 1990s that involved silhouetted commentators discussing the typically bad movie that they were watching. Sony's patent would take fun movie nights spent with a group of friends to the next level, by including games such as tomato-throwing or shooting a spider off the back of an actor.

A more extreme patent idea includes adding "shootable" virtual characters on top of a war or action movie. Adding the ability for viewers to play such a video game on top of a movie such as "Independence Day" might go over better than, say, adding shootable people in "Saving Private Ryan" or "Blackhawk Down."

Sony's PS3 conveniently plays Blu-ray discs along with video games, and so it might serve as the company's ideal platform for adding some interactivity to the TV-watching experience. But this remains just a concept that has yet to become realized.

The future of interactive TV may sooner include virtual racing in real-time against professional Formula One or NASCAR drivers.

Two separate companies have been testing services called "Real-Time Racing" and "Real Time Race," which allow people to use their home computers or video game consoles to compete for cash prizes against virtual representations of real racecars during real races.

"Real-Time Racing" company iOpener installs small packages inside racecars that track enhanced GPS coordinates, car speed and position, so that the virtual race cars almost precisely match the real televised coverage of races. Competitor Real Time Race maps out racing circuits ahead of time to create a 360 degree view of every part of the track, and allows players to drive virtual cars in photorealistic surroundings.

Home viewers already create their own interactive experiences by using the Internet while watching their favorite TV events. About one-in-ten viewers watching the 2009 Oscars were also logged onto Internet sites such as Facebook, according to Nielsen data. And the Consumer Electronics Association (CEA) reports that almost two-thirds of online adults say that they always, usually or sometimes surf the Internet while watching TV.

A recent CEA report even speculated on a future where people could "tag" jeans or shoes that they watch during a movie as a reminder to buy them later. The addition of tagging options might threaten to push even more product placement in movies and TV shows, but it's still a possible action for TV viewers — not to mention a useful source of targeted marketing data for retailers.

Many of these interactive TV options still remain just over the horizon. But for now, people can get more than their fill of interactive viewing by visiting their local movie theater during one of the rowdier showings.