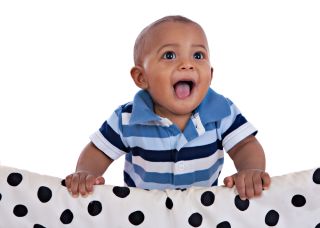 Adding it up — babies have a better grasp of numbers than you might suspect.
(Image: © Flashon Studio)

After long suspecting we're born with some math sense, researchers have shown infants indeed have some ability to count long before they can demonstrate it to Mom and Dad.

It turns out they're not unlike grown monkeys.

"We conclude that the babies are showing an internal representation of 'two-ness' or 'three-ness' that is separate from sensory modalities and, thus, reflects an abstract internal process," said Elizabeth Brannon of Duke University.

"These results support the idea that there is a shared system between preverbal infants and nonverbal animals for representing numbers," Brannon said.

Previous studies searching for this ability in human infants had failed, say Brannon and colleague Kerry Jordan, because the methods were inadequate.

The study, announced today, is published in the Proceedings of the National Academy of Sciences. The research is pursued in an effort to better understand the evolutionary origins of numerical ability and how that ability has developed in humans.