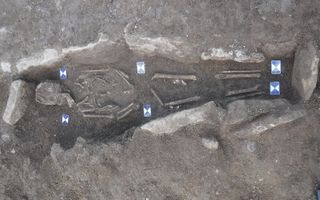 Some of the skeletons found at Pencraig Campus dated to 1,600 years ago.
(Image: © Archaeology Wales)

Scores of skeletons and artifacts — some dating back 1,600 years — were found in a long-hidden cemetery on the grounds of a college campus in Wales.

During 2016, construction of a new road to connect a local highway with Coleg Menai’s Pencraig Campus in Anglesey, Wales, revealed the remains of 54 people dating to the early medieval period, from the 4th century to the 8th century, according to Wales Online. Then, in 2017, an additional 32 individuals were uncovered nearby, prior to the construction of the college's new engineering center; bones and objects from this location dated from around A.D. 400 to A.D. 700, said Irene Garcia-Rovira, Project Manager at Archaeology Wales.

Experts with Archaeology Wales, a private archaeology company, discovered dozens of so-called cist graves — coffin-like boxes made of stone — during the 2017 excavation. Surprisingly, the people who were buried in the graves were not local. Rather, they came from across Europe, with chemical analysis of the skeletons tracing some individuals to western Britain, Scandinavia and Spain, Wales Online reported. [The 25 Most Mysterious Archaeological Finds on Earth]

Garcia-Rovira described the findings on July 26 at the town hall in Llangefni, Wales, the North Wales Chronicle reported.

Archaeology Wales researchers excavated about half of the existing site in 2017. Their investigation will be integrated with prior findings from Brython Archaeology — another private company — in a forthcoming scientific study, according to the Chronicle.

Alkaline in the cemetery's soil helped to preserve the remains, Garcia-Rovira told Live Science. Some of the individuals appeared to have died when they were in their mid-40s. That may seem young by today's standards, but reaching that age was impressive for the time, according to Wales Online.

Scientists also identified a Roman coin at the site dating to the second century and a decorative brooch in an early medieval style. One side of the coin was stamped with the face of Antoninus Pius, who reigned as emperor of Rome from A.D. 138 to 161, while the other side was heavily abraded, Wales Online reported. The brooch may have been deliberately placed in a grave or left behind by a mourner; "It could either be residual or some sort of heirloom," Garcia-Rovira said.

Editor's note: The story was updated on Aug. 7 to correct the age of the cemetery, Dr. Garcia-Rovira's title and affiliation and to clarify details about the findings.