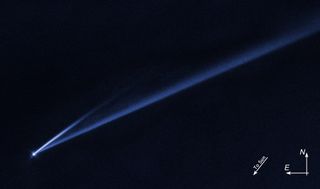 The asteroid named Gault may be tumbling through the final stages of a 100 million-year death spiral, and it's leaving bits of itself everywhere it goes.
(Image: © NASA, ESA, K. Meech and J. Kleyna (University of Hawaii), and O. Hainaut (European Southern Observatory))

An asteroid named Gault is spiraling into sloppy self-destruction — and, like watching a car crash, scientists are having a hard time looking away.

Gault is about 2.5 miles (4 kilometers) wide and, for now, lives in the asteroid belt between the orbits of Jupiter and Mars, along with 800,000 or so fellow space rocks. Soon, however, Gault may be nothing but a smear of dust on the cosmos. [The 8 Strangest Objects in the Universe]

Recently, telescopes around the world caught Gault "misbehaving," as one German scientist phrased it in a NASA statement. The asteroid is apparently wobbling and tumbling about itself faster than a healthy asteroid should, and it's beginning to avalanche little bits of itself into massive streams of debris that stretch for hundreds of thousands of miles behind it.

Astronomers at NASA, the European Southern Observatory (ESO) and elsewhere recently measured two such debris trails following Gault through space — one measuring approximately 500,000 miles (800,000 km) long and the other about 125,000 miles (200,000 km) long. These long tails are telltale signs that Gault is spinning out of control — probably completing a full rotation once every 2 hours, which is about as fast as an asteroid can theoretically spin before it disintegrates completely.

What's causing this self-destructive pattern? According to NASA, it may be the final throes of a 100 million-year-old death spiral that began shortly after Gault got too much sun in its youth. Solar radiation warms the surfaces of asteroids, NASA wrote, but it also causes those asteroids to release infrared radiation of their own. When asteroids lose heat, they also lose a bit of momentum. Over time, this momentum loss can create torque on the asteroid, which, in turn, gradually increases its rotational speed. (This is known as the YORP effect.)

Researchers predict that Gault's rotation started speeding up about 100 million years ago and has steadily accelerated by 1 second every 10,000 years since. Now, it's near the theoretical limit at which asteroids stop being asteroids and lose hold over their constituent pieces.

The two dust trails streaming out behind Gault may be the result of landslides on the asteroid's surface that lasted for hours or even days, NASA wrote, and there may be more to come as Gault continues its journey of self-destruction. If and when the rock finally loses form and crumbles to dust, astronomers hope to see it happen; events like this are considered extremely rare in the asteroid belt, happening roughly once a year.

A paper on this rare cosmic meltdown has been accepted for publication in a forthcoming issue of The Astrophysical Journal Letters.