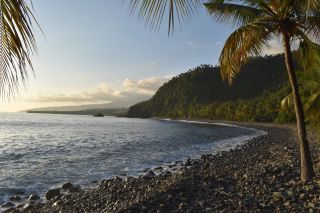 Anjouan island, off eastern coast of Africa, is mostly made of dark volcanic rocks, like these cobbles on the shoreline of one of the island's beaches.
(Image: © Kevin Krajick/Earth Institute, Columbia University )

On a tiny island between Madagascar and the east coast of Africa, scientists have discovered a mother lode of rocks that shouldn't be there.

The island is made from igneous, volcanic rock that hails from the oceanic crust. But the mystery rocks come from continental crust — more specifically, from a river delta or beach.

"It doesn't look like anything that could have formed on an island like that," said Cornelia Class, a geochemist at the Lamont-Doherty Earth Observatory at Columbia University. [See Images of the Odd Rocks on This African Island]

Funded by a National Geographic Society grant, Class recently led a scientific expedition to the island, guided by scattered reports of the light, sandy rock, which is known as quartzite. She and her colleagues found that the mystery is larger than they realized. In fact, it makes up half of a mountain.

Anjouan island is one of the Comoro Islands. It's a rugged, 163-square-mile (424 square kilometers) outpost in the Indian Ocean, rich in vegetation and home to around 277,000 people. Anjouan formed much like the Hawaiian Islands. It consists of the remains of a shield volcano, which spewed and oozed lava that gradually built up from the sea bottom.

Since at least the 1900s, geologists have reported finding some very nonvolcanic rocks on Anjouan. In the 1980s, a French team documented some scattered outcroppings of quartzite. In 1991, Class saw a few pieces herself while working on her doctoral research on the islands.

"All those years, it has bothered me that I didn't understand how those rocks got there," she told Live Science. [Photos: The World's Weirdest Geological Formations]

Quartzite simply shouldn't be on Anjouan. The island sits in an ocean basin. Such basins form as tectonic plates pull apart, allowing magma from the mantle to roil up, harden and form new crust. Due to this process, Class said, the rocks from ocean basins are basaltic: dark, magnesium- and iron-rich rocks of the sort that make up the Hawaiian Islands or the iconic outcrops of Devils Postpile in California.

Continental plates, on the other hand, are made of less-dense, lighter-colored granitic rocks. Transition zones between oceanic and continental crust can hold both types of rock, but Anjouan doesn't match those regions.

"There is nothing there that could form a quartzite," Class said.

And yet, when when Class and her colleagues Steven Goldstein of the Lamont-Doherty Earth Observatory and Christophe Hemond of the Université de Bretagne Occidentale in France surveyed Anjouan on the National Geographic-funded trip in September last year, they found far more quartzite than anyone had ever documented on the island before.

"It's almost half a mountain," Class said.

A Columbia University blog post about the trip documented the search for the quartzite. The researchers returned to sites where earlier geologists had discovered fragments of the light-colored rock. Fieldwork is tough on the island, Class said, because everything is covered with a thick layer of vegetation and soil.

And, the researchers soon learned, locals use the quartzite cobbles as knife-sharpeners. As a result, fragments of quartzite that have tumbled down in streambeds and rivers have been quietly relocated to villages and workshops over the years, leaving geologists fewer clues about where to search.

As the scientists hiked around the town of Tsembehou, though, they found more and more fragments of quartzite, even large boulders and outcrops of the substance. Eventually, they bushwhacked up a nearby knife-edge ridge called Habakari N'gani and found that its upper reaches were nearly entirely quartzite.

Class and her team are now pulling together their data to map the quartzite and to model its true size. Right now, the existence of the rock at this location is inexplicable. In some cases, such as Madagascar, continental crust can end up in the midst of an ocean basin because a chunk of continent — mantle, crust and all — breaks off and drifts away. But the chemistry of Anjouan's volcanic rocks doesn't indicate any association with a whole package of continental crust.

Somehow, the crustal quartzite ended up in the ocean basin and was lifted along with the volcanic rocks some 13,120 feet (4,000 meters) from the seabed.

Explaining this mystery will require more information, Class said. A first priority is to figure out how old the quartzite is, which would help scientists pinpoint where it originated. (Class guessed East Africa or Madagascar.) More geochemical measurements of the volcanic rocks that make up the rest of the island would help clarify the island's geological history as well, she said.

"This is what nature presents, sometimes," she said. "It's something we consider impossible, but then we find it, and once we find it, we have to explain it."