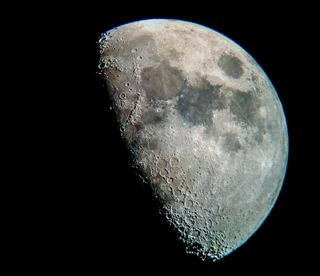 Last week, a 30-million-page archive of human history and civilization launched aboard a spacecraft headed for the moon.

The so-called "Lunar Library" is a small nanotech device that resembles a DVD, and it's intended as a "backup plan" so that everything we've ever learned as humans doesn't get lost in time, according to the nonprofit behind the idea, the Arch Mission Foundation.

The device is installed on Israel's Beresheet lander, which launched last week and is expected to touch down on the moon in April. Consisting of 25 nickel disks, each 40 microns thick, the archive is built to withstand space conditions. It holds a multitude of types of data explaining, well, humans. [10 Surprising Moon Facts]

The disks contain thousands of images of book pages, photos, illustrations, documents, the English Wikipedia, entire books, scientific handbooks, and a key that explains languages and translations between them. This library also contains songs, text and children's drawings relating to Israel's history and culture.

It's the third in a series of archives that make up the Billion Year Archive initiative. The project aims to put copies of this data in several places on Earth and in space so that the information is likelier to survive billions of years into the future.

The device contains both larger text that can easily be read with a simple magnifying glass and smaller text and photos that can be accessed only using more-powerful microscopes and technology.

Let's hope the extraterrestrials have a microscope … or a really good eye.