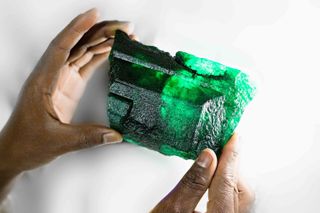 This 2.5 pound (1.1 kilogram) “lion emerald” is one of the single largest crystals ever unearthed in Africa’s Kagem mine — the most productive emerald mine in the world.
(Image: © Gemfields)

Miners in Zambia, in Africa, have discovered an emerald so large that the Queen of England herself would probably think, "That's a bit much."

The massive crystal is 5,655 carats and weighs about 2.5 pounds (1.1 kilograms) — about the mass of an adult human brain. The emerald will be auctioned off in Singapore later this month, according to a statement from Gemfields — the British mining company that owns 75 percent of the mine where the emerald was unearthed. (The Zambian government owns the remaining 25 percent.)

The emerald was discovered on Oct. 2 at Kagem, the world's largest emerald mine, in central Zambia. According to Gemfields, Kagem produces approximately 25 percent of the world's commercial emeralds.

The company has promised to divide 10 percent of the emerald's sale value between two local lion conservation groups — the Zambian Carnivore Programme and the Niassa Carnivore Project. For this reason, Gemfields has named the stone "Inkalamu," which translates to "lion" in the local Zambia Bemba language. [Sinister Sparkle: 13 Mysterious & Cursed Gemstones]

After being sold, it's possible that Inkalmu will be divided into many hundreds of individual stones, Gemfields experts said.

"This lion's resulting offspring —'The Pride of Inkalamu' so to speak — will continue the legacy for generations to come," Elena Basaglia, a Gemfields gemmologist, said in the statement.

Emeralds form over hundreds of millions of years as the fluid from cooling magma rises through various layers of deep-Earth minerals. According to the Kagem website, Zambian emeralds are the product of ancient reactions between two types of rock — talc magnetite schist (a black rock that formed about 1.8 billion years ago) and pegmatite (a white rock that formed a scant 500 million years ago).  Using complex geological models, scientists at Kagem attempt to map out exactly where the largest intersections between these two types of rock are most likely to occur in the mine's approximately 16-square-mile (41 square kilometer) territory.

While Inkalamu is certifiably massive, it's not the largest emerald ever pulled out of Kagem. That honor goes to a 6,225-carat emerald mined in 2010. Gemfields named this stone "Insofu" — the Bemba word for "elephant" — for its massive size. Infosu was auctioned off in 2017 for an undisclosed price.

The world's largest uncut emerald — the so-called Bahia emerald — was unearthed in Brazil in 2001. It weighs nearly 800 pounds (360 kg), has been stolen multiple times and was once listed for sale on eBay at $75 million.