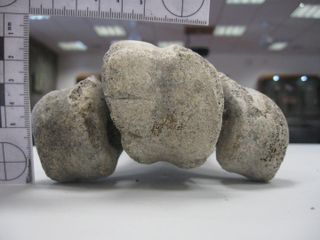 Cut marks can be seen in the lower leg bone, called the tarsometatarsus, of the elephant bird. These cut marks were probably made while removing the toe from the foot.
(Image: © ZSL)

Humans are suspected to have killed off the largest birds that ever lived. Regardless of whether that's true, however, new evidence shows that they coexisted for thousands of years.

Ancient bones of extinct elephant birds (Aepyornis and Mullerornis) found in a marsh site in Madagascar bear traces of cut marks, chop marks and fractures that probably arose from butchering and hunting, according to a new study published yesterday (Sept. 12) in the journal Science Advances.

Elephant birds probably stood nearly 10 feet (3 meters) tall and weighed over a thousand pounds (half a metric ton), according to BBC Earth.

Though scientists suspected that humans had wiped out this species, they didn't realize how long our prehistoric ancestors actually coexisted with the giant birds. Indeed, the cut marks revealed that humans arrived in Madagascar over 6,000 years earlier than was previously thought. [Wipe Out: History's Most Mysterious Extinctions]

Lemur bones and archaeological evidence had originally led scientists to date the arrival of humans to Madagascar to around 2,400 to 4,000 years ago, the researchers said in a statement. Through radiocarbon dating of the elephant bird bones, this new study found that humans were actually present on the island around 10,500 years ago.

Most of Madagascar's megafauna — including its elephant birds, hippos, giant tortoises and giant lemurs — were wiped out less than 1,000 years ago, according to the statement.

However, now scientists know that "humans seem to have coexisted with elephant birds and other now-extinct species for over 9,000 years, apparently with limited negative impact on biodiversity for most of this period," lead author James Hansford, a doctoral student at the Zoological Society of London's Institute of Zoology, said in the statement. Perhaps a "radically different extinction theory is required to understand the huge biodiversity loss that has occurred on the island."

It remains unclear who those early-arriving prehistoric people were; their presence is marked only by cuts and scrapes.