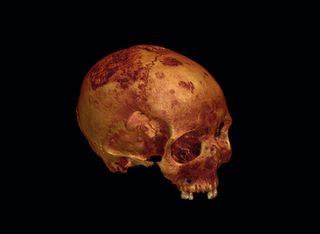 Around 2,500 years ago, the skull of a woman who died of cancer was buried facing into an artificial cave dug out of the rock, as if staring at the remains of at least 50 people hidden inside, archaeologists have discovered.

The "extremely peculiar position" of the buried skull, which was discovered near the town of Baucina, in Sicily, Italy, has scientists puzzled, they said.

The skull belonged to a woman who died when she was between 35 and 50 years old. She seems to have had a cancer that had spread to her skull, leaving 14 holes in it. Scientists believe the cancer may have started in her breasts, eventually spreading into her skeleton. [25 Grisly Archaeological Discoveries]

Unfortunately, the tomb had been robbed at some point in time, the skeletons in the cave became jumbled up and any grave goods that they were buried with were stolen, the team of scientists wrote in a paper published in June in a special "cancer issue" of the International Journal of Paleopathology.

It's uncertain where the rest of her body is buried; nevertheless, archaeologists believe her skull was not disturbed by tomb robbers.

"We can assume that it [the skull] was found undisturbed in its original position, as grave robbers have used another way to get into the cave immediately above the entrance," study researcher Roberto Miccichè, an adjunct anthropology professor at the University of Palermo, told Live Science.

Miccichè and others from the university's archaeology department discovered the skull in 2014 during excavations in the artificial cave.

The cancer itself may explain why she was buried with her skull facing into the cave. The holes the cancer left on her skull and other symptoms of her disease may have appeared unusual to the people in her community and may have left a strong enough impression that they chose to have her skull buried facing 50 other dead people. "Personally, I agree with this interpretation, as the clinical appearance of metastases on the skull [with its scattered holes] may have impressed the afterlife perception of people who lived beside the individual," Miccichè told Live Science.

"Another possibility could be connected to a particular role occupied in life within the ancient community by the person to whom the skull belonged," Miccichè said, noting that "both of these interpretations are very hard to prove, as we do not have many similar cases that we can use for comparison purposes."

Research continues and "we are starting with a new research project with the aim to explore the perception of death and illness among ancient cultures in Sicily and maybe we will be able to provide further information on this case under a broader social and sacred perspective," Miccichè said.