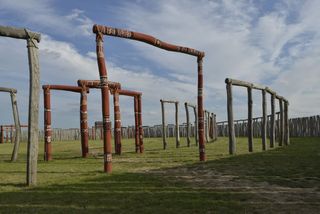 The broken, battered bones of children, teenagers and women discovered at the newly excavated "German Stonehenge" may be evidence of ancient human sacrifice, a new study finds.

Archaeologists found the fractured skulls and rib bones buried in pits alongside axes, drinking vessels, butchered animal bones and querns (stone mills) at an archaeology site near Pömmelte, a village in Germany about 85 miles (136 kilometers) southwest of Berlin.

The victims' last moments were gruesome; it appears they were thrown or pushed into the pit, and that at least one of the teenagers had their hands bound together, said study lead researcher André Spatzier, an archaeologist at the State Office for the Preservation of Historic Monuments at Baden-Württemberg, a state in southwest Germany. [Photos: Stone Age Skulls Found on Wooden Stakes]

Then again, it's possible that the dead were victims of an attack or raid, Spatzier said. But given that no adult men were found buried there and that ritualistic, broken artifacts were buried with the bodies, human sacrifice seems more likely, Spatzier said.

Just like England's Stonehenge, the site near Pömmelte is a henge — a circular prehistoric monument constructed with wood or stone structures. The henge has several concentric circles, the largest of which is about 380 feet (115 meters) across. It was discovered in 1991, just two years after the Belin Wall fell, when people in an airplane flying overhead spotted it. However, in-depth excavations weren't done until more recently, Spatzier said.

Ancient people built and used the henge-like monument during the transition from the late Neolithic to the early Bronze Age, from about 2300 B.C. until 2050 B.C., when it was destroyed — likely ritualistically.

Archaeologists suspect a ritualistic end because they found that the wooden postholes at the monument were filled with artifacts. One of the ditches was filled with ash, likely from the burned wooden posts, which dates to the same period as the artifacts do, Spatzier said.

"It looks like at the end of the main occupation, around 2050 B.C., they extracted the posts, put offerings into the postholes and probably burned all the wood and back-shoveled it into the ditch," Spatzier told Live Science. "So, they closed all the features. It was still visible above ground, but only as a shovel depression."

Before the monument's destruction, and even afterward, ancient people buried 13 of their dead there. On the eastern side of the henge, away from the possible human sacrifices, archaeologists found the burials of men, ages 17 to 30. Unlike the other group, there was no evidence of injuries on the men's bodies, Spatzier said.

Curiously, the men had very simple burials; they weren't buried with any artifacts. One male body even dated to 1900 B.C., long after the henge had been destroyed, Spatzier said. The bones of this body weren't in a regular anatomical position, suggesting that this was a second burial for the individual, Spatzier added. [In Photos: Carved Human Skulls Discovered at Ritual Site]

It appears that these men were privileged individuals, as they were buried with their bodies facing east on the eastern side of the enclosure, possibly reflecting "the association of death and sunrise, symbolizing belief in reincarnation or an afterlife," Spatzier and study co-researcher François Bertemes, an archaeologist at Martin Luther University of Halle-Wittenberg in Germany, wrote in their study published online today (June 28) in the journal Antiquity.

Ancient people also probably used the monument as a place to perform rituals, Spatzier said. Like Stonehenge, the Pömmelte site is arranged with respect to the equinox and solstice. But while Stonehenge's stone monuments are placed in such a way that viewers can see the rising sun on the summer solstice, the so-called German Stonehenge's four entrances were primed for the days halfway between the equinoxes and the solstices, an important time for agrarian communities, Spatzier said.

Given its long history — the Pömmelte site was in use for nearly 300 years — it's not surprising it was used for so many activities, Spatzier said.