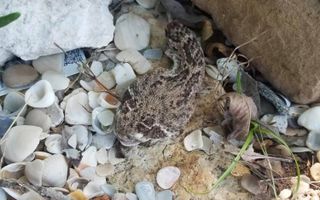 The decapitated head of the rattlesnake
(Image: © Courtesy of Jennifer Sutcliffe)

Shortly after a man killed a rattlesnake in his backyard, the rattlesnake's severed head bit and injected venom into the man, seriously injuring him, according to news reports.

The zombie-like incident happened when Jennifer Sutcliffe and her husband were working in their backyard near Corpus Christi, Texas, over Memorial Day weekend, according to KIII, an ABC-affiliated station. Sutcliffe said she spotted the 4-foot-long (1.2 meters) snake while weeding, and that her husband beheaded it with a shovel to defend her.

But when he bent down to dispose of the snake, its decapitated head bit his hand. How is this possible? [Image Gallery: Snakes of the World]

The answer has to do with the snake's physiology. Snakes are cold-blooded creatures, meaning they get heat from external sources, such as sunlight and warm surfaces. (The scientific term for this is "ectotherm.")

Because snakes don't need to internally maintain their body temperature, they don't need as much energy — which is burned up using oxygen — as warm-blooded "endotherms" do, said David Penning, an assistant professor of biology at Missouri Southern State University who wasn't involved in the Texas case.

If a mammal loses its head, it will die almost immediately. But snakes and other ectotherms, which don't need as much oxygen to fuel the brain, can probably live on for minutes or even hours, Penning said.

"Severing the head isn't going to cause immediate death in the animal," Penning told Live Science. "It doesn't need that much oxygen in the first place."

Granted, the snake might not have been self-aware that it no longer had a body. Rather, it likely just felt the pain from the decapitation and then tried to defend itself, Penning said.

Meanwhile, there's some debate about whether venomous snakes inject more venom into large animals than they do into small animals, and if they do, whether they consciously make that decision, said Scott Boback, an associate professor of biology at Dickinson College in Pennsylvania who also wasn't involved with the Texas man's case.

While the venom question isn't settled, "I would venture to guess that the reaction of a decapitated snake was just an involuntary one," and that the snake was not controlling how much venom it injected into the man, Boback told Live Science. This may explain why the man had to receive so much antivenom at the hospital — 26 doses, Sutcliffe told KIII, which is far more than most patients need.

If you encounter a rattlesnake, the best option is to move away from the snake and leave it alone, Penning said. Rattlesnakes aren't known to chase people, he noted. Instead, call your local fish and wildlife department, which will safely remove the snake. [Shhh: A Gallery of Secretive Ground Snakes]

If you are bitten by a venomous snake, you should immediately go to the emergency room, which will administer antivenom and treat any other symptoms you have, Penning said. Pay no attention to the urban myth about sucking out the poison, and skip the so-called venom-extractor kits, he added. The body is like a sponge, and it will absorb and circulate the venom quickly, and these strategies will do more harm than good.

Of the 10,000 people bitten by snakes every year in the United States, between five and seven die, Penning said. In the Texas case, the man was rushed to the hospital and is now recovering.

Although demonized in popular culture, rattlesnakes play a vital role in their ecosystems. Because they eat so many rodents, a single timber rattlesnake (Crotalus horridus) can remove between 2,500 and 4,500 ticks from their home range, according to research from the University of Maryland. (The ticks live on the rodents.) This, in turn, helps humans because ticks can carry Lyme disease.