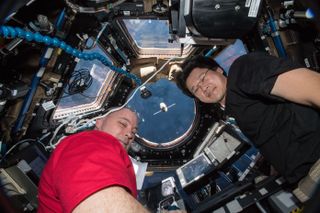 The Micro-11 mission, which made its way to space aboard a SpaceX Falcon 9 rocket's Dragon resupply capsule, amounts to a bunch of containers of frozen human and bull sperm. Aboard the International Space Station (ISS), scientists will thaw the sperm, according to a NASA statement, and then study it to see how weightlessness affects its ability to move and prepare to fuse with an egg.

"Previous experiments with sea urchin and bull sperm suggest that activating movement happens more quickly in microgravity," NASA officials wrote, "while the steps leading up to fusion happen more slowly, or not at all. Delays or problems at this stage could prevent fertilization from happening in space." [7 Facts About Sperm]

NASA is sending up bull sperm along with human sperm, agency officials wrote, because the bull cells are more consistent in activity and appearance than human sperm. By studying it alongside the human sperm, astronauts will be able to figure out whether any strange behavior they're seeing is a result of something unusual about a particular sperm sample or the effects of microgravity.

Performing this experiment is about as close as NASA has ever come to acknowledging that, sooner or later, sex in space is almost certainly going to become a reality. While rumors have long abounded of Russian or American spacefarers hooking up in orbit, none have ever been officially confirmed. and most are likely false according to past reporting by Live Science sister site Space.com.

It's perhaps worth noting that the current ISS crew of six men may have had alternative methods for acquiring a whole bunch of human sperm that would have been cheaper than hitching a ride on a multimillion-dollar space launch, but it's understandable why the space agency didn't go that route, if for no other reason than the limits of what can be reasonably demanded in even an outer space workplace.

The sperm will eventually make its way back to a lab at the University of Kansas for further testing, according to another press release, where one of the scientists coordinating the study will perform further experients to see how time in space changed its behavior.