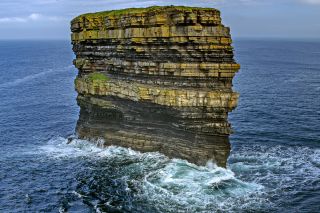 A photo of Dún Briste — a layered, chunky tower of rock rising off the western coast of Ireland —skyrocketed to the top of Reddit last week. But the post's captivating title — "What millions of years look like in one photo" — isn't exactly accurate, a geologist told Live Science.

The sea stack is old, but "almost certainly doesn't represent millions of years" of geological processes, Maria McNamara, a paleobiologist at the University College Cork, in Ireland, told Live Science in an email. "Rather, [it likely formed in] tens to hundreds of thousands of years," she said.

Its rapid formation (geologically speaking, at least) doesn't make this structure any less marvelous. The view of the sea stack from Ireland's County Mayo is stunning, which may explain why the picture has received about 57,300 up-votes on Reddit since its posting on Feb. 9. The layered, sedimentary rock formed during the Carboniferous, a 60-million-year-long period lasting from about 359 million to 299 million years ago. That's long before dinosaurs roamed the Earth. (In other words, the sea stack formed millions of years ago, but it formed very quickly.) [In Photos: The UK's Geologic Wonders]

It's unclear whether Dún Briste has any fossils from the Carboniferous period. But if it does, they would likely be the remains of creatures that lived during that time period, including corals, brachiopods (clam-like creatures) and crinoids (sea animals that look like flowers), McNamara said.

When it formed, Dún Briste was still connected to the mainland. Looking at the sea stack's layers and edges, McNamara noticed that the structure shows evidence of onlapping strata, or layers. This indicates there was a rise in sea level long ago, she said.

"As the land surface was flooded [as sea levels rose], sediments were laid down progressively inland," McNamara said.

In 1393, an arch leading to the 150-foot-tall (45 meters) sea stack collapsed during a storm, according to Dunbriste.com. This may explain why it was named Dún Briste, which is Gaelic for "broken fort," according to the website.

In 2016, daredevil Iain Miller climbed the cliff, according to the Daily Express, a news outlet in the United Kingdom. That's the first time a person had set foot on top of the sea stack since 1990, when a group of climbers summited the stack, the Daily Express reported.

Before that, a team of scientists helicoptered to the top of Dún Briste in the 1980s. They reportedly found the remains of a medieval house and a broken quern stone, that is, a stone used for grinding corn, according to Castlebar.News, a news publication in west Ireland.