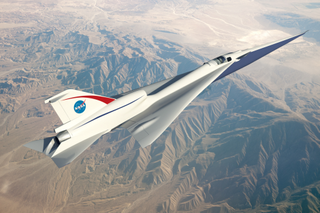 A NASA rendering shows an early vision of what the quiet supersonic X-plane might look like.
(Image: © NASA)

A very quiet plane could be coming very fast.

The recent 2019 NASA budget request was, as Live Science sister site Space.com reported, light on science and funding for the International Space Station but heavy on commercialization and space exploration. In this proposed budget, President Donald Trump's administration also announced its intention to fully fund a new experimental supersonic airplane.

The aircraft, the latest addition to the X-series dating back to Chuck Yeager's sound-barrier-breaking craft, the X-1, will be designed to be much quieter than previous faster-than-sound jets.

The plane, called the Low-Boom Flight Demonstrator, would make its first flight in 2021 if the budget line is approved and the craft's development goes according to plan. It's meant as a test bed for technologies that could one day show up on commercial planes, the budget states. It would allow for faster-than-sound travel without the glass-shattering booms that characterize supersonic fighter jets and that enraged Queens, New York, residents during the era of the supersonic New York-to-Europe Concorde jet.

Here's the problem the quiet supersonic craft could solve: When a plane moves slower than sound, the jet's sound waves arrive on the ground in pretty similar shape to how they left the engine (with perhaps a little distortion and pitch-shifting thanks to things like the Doppler effect.) But — as Pennsylvania State University's NoiseQuest lab explained on its website — when planes move faster than sound, they outrun their own engine noise, with the vibrations spreading out behind them through the air in a kind of invisible wake. [Supersonic! The 10 Fastest Military Airplanes]

That wake crashes into the ground as a powerful shock wave, with all the vibrations of a supersonic engine's approach compressed together. They all arrive at each spot that they reach within moments of each other, so instead of the drawn-out whine of an aircraft approaching, observers below hear a single, teeth-rattling boom.

People don't generally like normal airport noise, as the NoiseQuest lab notes, and people definitely don't like when that sound arrives in a series of shocking crashes. That's led to the 1973 Federal Aviation Administration regulation §91.817, which prohibits civilians from engaging in supersonic flight over land in the United States. No supersonic civilian jets have operated since the Concorde was retired in 2003, NASA wrote in a statement accompanying the budget. (The Concorde only flew at subsonic speeds overland in US territory.)

Lockheed Martin has been awarded a preliminary budget to build the new quiet X-plane. The company aims, according to earlier reporting by Bloomberg on the project, to reach a NASA target of 60 to 65 decibels per boom (at least as heard from the ground) by designing a low-sound airframe shape and using engine placement that reduces noise. This would be much quieter than existing supersonic jets.

In this statement, NASA said that the goal is a sonic boom "so quiet it hardly will be noticed by the public, if at all … like distant thunder [or] the sound of your neighbor forcefully shutting his car door outside while you are inside."

NASA is also requesting funds for research into "hypersonic" aircraft, machines that go many times the speed of sound. As Space.com reported, such planes have possible applications as weapons or for space travel.

In a quote printed alongside the requests, Vice President Mike Pence put these goals in the context of a rose-tinted, Manifest Destiny-inflected vision of American history:

"Like the railroads that brought American explorers, entrepreneurs and settlers to tame the Wild West, these groundbreaking new technologies will open untold opportunities to extend the range of American action and values into the new worlds of outer space," the vice president said. "And by fostering much stronger partnerships between the federal government and the realm of industry, and bringing the full force of our national interest to bear, American leadership in space will be assured."