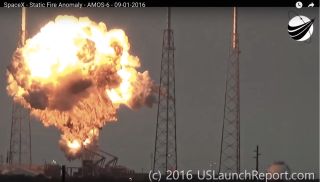 This screen grab from a video by USLaunchReport.com shows the explosion of a SpaceX Falcon 9 rocket on Sept. 1, 2016.
(Image: © USLaunchReport)

The world might be watching rather apprehensively as Elon Musk's SpaceX readies the launch of its Falcon Heavy, the most powerful rocket since the legendary Saturn V — the heavyweight launcher that propelled humans to the moon. Many still remember the September 2016 launchpad explosion that wiped out not only SpaceX’s workhorse rocket Falcon 9 but also an Israeli telecommunications satellite.

This wasn't the first disaster in SpaceX's history. A little over a year before that, in June 2015, Falcon 9 turned into a ball of fire 2 minutes after liftoff. That time, the rocket carried the Dragon capsule, which was supposed to bring supplies to the International Space Station.

Rockets are filled with highly explosive substances that need to be burned in a controlled manner to allow them to overcome Earth's gravity and deliver often very heavy satellites into space. At the same time, their structures experience extreme loads while needing to be as light as possible. Many things can go wrong, and when that happens — POW — there is no way back. [SpaceX's Huge Falcon Heavy Rocket: How It Works (Infographic)]

SpaceX's competitor Orbital Sciences lost its Antares rocket in a fiery spectacle just seconds after the vehicle cleared the launching platform in October 2014.

But according to experts, rocketry is not that dangerous. However, it sometimes takes a while for the new kids on the block to get it right.

Each of the two SpaceX explosions had a different culprit — both, however, were caused by unexpected technical malfunctions in the propulsion system. In the case of the June 28 blowup, a faulty supportive structure — a strut — broke, causing a breach of a helium tank. Helium is used to pressurize the rocket's fuel tanks.

The second explosion, according to SpaceX, was caused by a failure of a pressure vessel inside a tank of the rocket's second stage holding liquid oxygen, which enables the main fuel to ignite.

Statistically, the most reliable rocket is the European Ariane 5, which experienced just two complete failures in more than 20 years of operation. On Jan. 26, however, the reliable Ariane 5 lost contact with its ground controllers about 9 minutes after liftoff. Miraculously, the rocket still delivered a large telecommunication satellite into orbit, albeit a slightly incorrect one.

However, it does not always apply that the longer you fly, the better you get. Russian rocketry has experienced a streak of unfortunate failures in the past decade, even though the country's technology hasn't changed much in decades.

The Russian failures have largely been blamed on the poor quality of manufactured parts and improper quality control, with many experts saying that the space sector of the once-pioneering nation is in complete disarray.