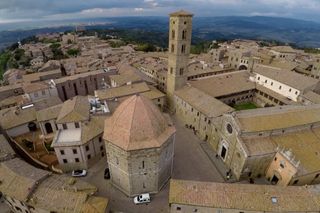 The mountaintop town of Volterra in central Italy witnessed the rise and fall of the Roman Empire. Now, researchers are using the latest reality capture technology and software to preserve a 3D digital record of its ancient temples, theaters and other buildings for the future, and to gain new insights into how they were made.

Volterra in the Tuscany region, about 30 miles (50 kilometers) southwest of Florence, is among the oldest inhabited cities in Europe, said Wladek Fuchs, professor of architecture at the University of Detroit Mercy.

To many tourists, Volterra's is most famous for its Medieval stone buildings, built from the 12th century when the town was subject to the rule of the Republic of Florence. From the 14th century, it was ruled by the Medici family and later the Grand Dukes of Tuscany. [See Images of the 3D Rendering of Volterra]

But to archaeologists and architects, the fame of Volterra dates from at least the time of the Etruscans, from around the seventh century B.C. After the fifth century B.C., Volterra was one of the 12 cities of the Etruscan League, a political alliance of ancient city-states that had a formative influence on the emerging city of Rome, about 100 miles (160 km) to the southeast.

"It's estimated that the hill where Volterra is located has been inhabited for about 3,000 years, and it was never abandoned," Fuchs told Live Science.

"The newer periods have destroyed a lot of the fabric of the previous periods, but we also have all of that layering of history, which is somehow encoded within that material fabric of the city," he said: "It is an amazing puzzle to study, and an amazing historical witness of the culture of that region."

In 2016, Fuchs and the Volterra-Detroit Foundation, an educational group he's president of, started working with the U.S. software company Autodesk and other sponsors to document the archaeological sites of the town using the latest reality-capture technologies, including geographical mapping systems, portable laser scanners and aerial drones. [24 Amazing Archaeological Discoveries]

Over two weeks, an international team of experts from the fields of architecture, engineering, construction and surveying made detailed 3D records of about a dozen archaeological sites and architectural features in Volterra, ranging from a unique Etruscan temple from the third century B.C. to the turreted medieval town hall, which was built between A.D. 1208 and 1257.

The 3D datasets are too large and too detailed to be easily combined into a single model of the ancient town, but they are being used to compile a digital archaeological map of the city that will be available to researchers through Volterra's city authorities and the archeological authorities for the Tuscany region based in Florence, Fuchs said.

A key breakthrough from the collaboration has been the development of a new understanding of the techniques used to design and build Volterra's semicircular Roman-era theater, which was first excavated in the 1950s and is now considered an architectural ancient wonder.

"People have been wondering about how these theaters were designed," Autodesk's executive on the project, Tristan Randall, told Live Science: "How was it possible that they could make these complex structures, using just Roman numerals and Euclidian geometry?"

"Essentially, what Wladek [Fuchs] has done now has been to build a very detailed methodology [of the ancient design process] that would have been impossible without this detailed reality-capture data to analyze," Randall said.

The detailed 3D records would let authorities monitor Volterra’s archaeological sites for changes over time, and help in the planning of future excavations, he said.

The team also documented the town's ancient acropolis, or sacred district, which includes the remains of both Etruscan and later Roman temples.

Another significant site was an Etruscan-era arched gate in the defensive stone wall of the city, dated to around the fourth century B.C: "It is one of only two gates of this kind in Italy," Fuchs said: "And it was not the Romans, but the Etruscans, who invented the arch."

Volterra's Roman amphitheater, first discovered in 2015, will also be part of the 3D digital rendering. An open oval stadium measuring 260 feet (80 meters) across, the amphitheater would have been the scene of life-and-death fights between gladiators and wild animals.

The Volterra-Detroit Foundation and Autodesk will host another workshop in April this year at the foundation's residence in Volterra, when a second international team will spend about two weeks adding its expert knowledge to the archaeological record of the ancient town.

Elements of the reality-capture project, including 3D models of the Etruscan arch and a stone pedestal from Volterra's Roman theater, are also available to the public at a new website, ScanningVolterra.com.

"Modern reality-capture techniques allow us to draw conclusions that were invisible for us in the past," Fuchs said: "Digital technology allows us not only to preserve ancient sites, but to also understand better what we have."