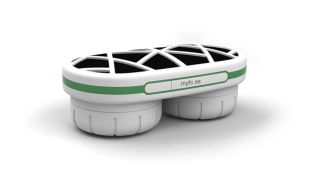 A palm-sized fuel cell that turns water into electricity aims to make wall outlets a thing of the past for charging up your cell phone.

Being off the grid, or away from an AC outlet, used to mean you couldn’t charge your phone or other personal electronic devices. But a new device called the H3 charger aims to simplify on-the-go charging.

Developed by Stockholm-based myFC, the H3 charger relies on portable fuel cells and is set for commercial release in Scandinavia in December, before making its way to a wider market including the United States some time in 2011. It will cost approximately $40 to $50.

About the size of a sandwich, the rectangular–shaped charger houses a so-called proton exchange membrane (PEM) fuel cell. Like other fuel cells, the H3 chemically reacts hydrogen – stored in containers the company calls "tea bags" – and oxygen from the air at opposite electrodes to create electricity.

Until now, however, most PEM power devices were too bulky to carry around because they contained stacked fuel cells. To prevent the device from overheating while distributing the hydrogen and oxygen throughout the stack, conventional designs required extra components such as compressors and pumps, which take up space and consume energy.

The fuel cells within the H3 charger don't require these extra components because they aren't stacked vertically atop one another. Instead, they are connected side-by-side using adhesives. Also, a specially designed membrane efficiently spreads the hydrogen throughout the device without pumps.

Out in the Wilderness

To use the H3, users carry the charger plus a few tea bags fuel packets containing hydrogen fuel.

When it's time to charge up,  “the only thing that you do out there in the archipelago or the forest is pour water into the reaction chamber and at the same time put a tea bag into that compartment and close it and off you go,” said myFC CEO Björn Westerholm.

The chemical reaction that takes place between the water and the fuel pellets produces hydrogen, which moves up into the fuel cell to produce electricity.

The power produced can be used immediately – just connect your phone to the charger using a mini USB connector. Or it can be stored for later use by a small lithium-ion battery that’s included in one of the charger models.

In addition to making charging outdoors a cinch, the H3 charger could also be useful in developing countries, Westerholm said.

“To our knowledge, there are about 1 billion people in developing countries that actually have cell coverage … [and] if they had a cell phone they could use it,” he told TechNewsDaily.

According to Westerholm, the main thing preventing people in developing countries from getting cell phones is not price or availability, but the lack of electricity.

Westerholm said that the fuel cell chargers his company will market in developing countries will use a different design to get the costs down to about $15.

These chargers will have "more optimized electronics for that particular phone market with specific connections that will drop the price down dramatically,” Westerholm said.

But Isidor Buchmann, CEO of Cadex Electronics, a battery analysis firm, said $15 could still be too expensive for communities that earn an average of $2 per day.