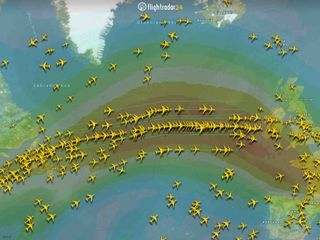 A map provided to Live Science by FlightRadar24 shows a line of jets clustering in the fastest-moving winds of the jet stream.
(Image: © FlightRadar24.com)

What's going on here? Turns out, an unusually fast jet stream is offering commercial jets the chance make the crossing at unheard-of speeds, and the airline Norwegian has taken full advantage of the opportunity, Wired reported today (Jan. 23). One recent Norwegian flight hit a cruising speed of 770 miles per hour (1,239 kilometers per hour), Wired reported. Another, a Boeing 787, hit a peak speed of 779 mph (1,254 kmph). That's blistering by passenger flight standards — typically, commercial jets cruise at about 550 mph (885 kmph), according to MIT.

All that added speed helped Norwegian set a new record for the transatlantic crossing. As the aircraft-tracking site Flightradar24 confirmed, Norwegian flight DY7014 took off at JFK airport in New York City Jan. 15 and landed just 5 hours and 13 minutes later at London Gatwick Airport — three minutes faster than the previous record, set in 2015, and half an hour faster than usual.

Physics-savvy readers might wonder what a Boeing 787 — not a supersonic jet — was doing at supersonic-sounding speeds. At 35,000 feet, the cruising altitude of a typical passenger jet, sound travels at about 660 mph (1,062 kmph). So why didn't the Norwegian planes land full of passengers rattled from a journey across the sound barrier?

As Wired reported, a 779 mph ground speed does not translate to moving 779 miles per hour through the air. That plane reached that high speed with a tailwind of 224 mph (360 kmph) — which means the air moving over the airplane's wing was only moving at an effective speed of about 555 mph (893 kmph), well short of the speed of sound. So relative to its surrounding air, the jet never breached the speed of sound, which meant it — and the passengers on board — never felt any of the effects.

Another way to think about this is to imagine the jet stream not as a wind but as a moving object containing the airplane. The airplane flew 555 mph (893 kmph) within that object, but because that object was also moving in the same direction the plane got to its destination even faster.

Wired noted that all these speeds are only out of the ordinary for subsonic jets. The fastest transatlantic flight by a passenger jet remains the 2 hour, 52 minute, and 59 second flight of British Airways' supersonic Concorde jet on February 7, 1996. As Guinness World Records notes, that flight, unusually fast even for the retired Mach 2 passenger cruiser, also took advantage of a faster-than-usual winter jet stream.