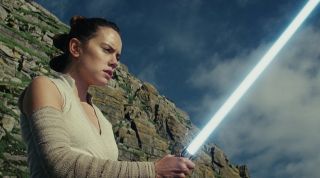 Rey, played by Daisy Ridley, trains in the ways of the Force in "Star Wars: The Last Jedi."
(Image: © Lucasfilm)

As "Star Wars: The Last Jedi" opens in theaters and its heroine Rey seeks to learn the ways of the Force from an aged and isolated Luke Skywalker, it raises some obvious and ongoing questions:

Is there anything in science — particularly in quantum physics — that resembles the Force? Can objects be manipulated instantaneously from a distance?

These aren't the forces that you are looking for

Obi-Wan Kenobi told Luke Skywalker in the original Star Wars film that the Force "surrounds us and penetrates us; it binds the galaxy together."

Modern physicists know that there are actually four fundamental forces: the two nuclear forces, the electromagnetic force and the gravitational force. All of these play a role in binding matter together, from the tiniest of atoms to the largest of planets.

However, these are probably not the forces we are looking for. Old Ben Kenobi, Yoda, and, eventually, Luke, could communicate telepathically over large distances and move objects with their minds.

Are these feats possible? What do the laws of physics say about this?

I find your lack of faith disturbing

Einstein's theory of relativity put some strict limits on how fast we can communicate — the ultimate speed limit is the speed of light.

So, if you needed to send a message to Alderaan to warn the citizens of an Imperial attack, there would always be a delay. Even if you wanted to, you couldn't warn them in time to evacuate because it takes time for light to travel to transmit the message.

Ben Kenobi couldn't possibly have felt a disturbance in the Force only a few instants after the Death Star destroyed Alderaan. Or could he?

It's true, all of it

What does quantum physics say about information transferred over large distances? Unfortunately we cannot break Einstein's speed limit, even if we had the Millennium Falcon. We'll set aside Han Solo's perhaps not-so-absurd claim that it made the Kessel Run in less than 12 parsecs — a measure of distance, not time.

However, through a trick of quantum mechanics, you can link two particles in a special way, separate them, and then observe the effects of one upon the other over large distances. This is known as quantum entanglement — placing two objects in the same entangled quantum state. And it is weirder than anything that Star Wars creator George Lucas could come up with (Jar Jar Binks excluded, of course).

Entanglement can be demonstrated in the lab with particles of light. When these two particles, or photons, are separated over large distances, they are still correlated with each other. If you measure one particle, the other particle's state will be determined immediately no matter how far it is away.

Einstein didn't like this idea, since it was "spooky action at a distance." However, modern physics experiments have shown that entanglement is real — particles can be connected over large distances.

In fact, George Lucas was influenced by quantum theory when he was writing the original script for Star Wars. In the late 1960s and early 1970s, New Age thinkers proposed that quantum entanglement is a "force" that really does bind us all together.

It is well known in physics experiments that the observer can become entangled with the object that they are measuring, changing the measurement.

This led to the idea that we are all entangled in some way, and there really is a connection between every living thing in the galaxy.

I've got a bad feeling about this

There is a catch, though. The effects of quantum entanglement tend to be very small for everyday objects.

If Kylo Ren was a physicist, he could manipulate a few particles of light to become quantum entangled, but stopping a laser beam in its tracks would be more difficult.

However, in the world of condensed matter physics — the study of solids — entanglement is more commonplace.

Solid-state physicists study entanglement of billions and billions of particles together, often with spectacular new results such as superconductivity.

These new phenomena — such as a superconductor floating over a magnet in the Meissner effect — are from macroscopic quantum entanglements of electrons, or a spooky "force" acting over large distances.

The "Force" of quantum entanglement really awakens in these new "quantum materials."

From a certain point of view

So, there is some truth in the idea behind "The Force," from a certain point of view, as Ben Kenobi would say.

What about the Force as "an energy field created by all living things?"

Physicists are only just now studying the effects of quantum entanglement in biology, in a relatively new field called "quantum biology."

There is circumstantial evidence that processes in large biomolecules could be influenced by quantum entanglement effects.

The odds of entanglement playing a significant role in the processes of life seem to be low. However, as Han Solo would say: "Never tell me the odds!"