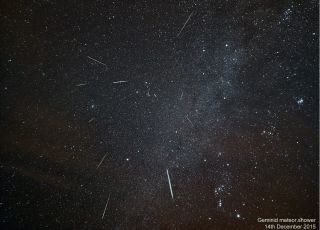 Astrophotographer Kevin Lewis produced this composite image of the Geminid meteors using exposures taken on the island of Anglesey, off the northwest coast of Wales, on Dec. 14, 2015.
(Image: © Kevin Lewis)

Were it not for this past summer's Great American Solar Eclipse, the most anticipated celestial event in 2017 would almost certainly be the upcoming performance of the Geminid meteor shower.

This pre-Christmas display of celestial fireworks is due to reach its peak during the long, dark hours from Wednesday night (Dec. 13) into early Thursday morning (Dec. 14).

The moon will be a thin, waning crescent that won't rise until the predawn hours, when the Geminids reach their peak. This annual shower is as reliable as the Perseids of August and is now, according to British meteor expert Alastair McBeath, "one of the very best presently seen from the Earth." [Geminid Meteor Shower 2017: When, Where & How to See It]

You may not be overly excited about the prospects of spending a night under the stars looking for Geminid meteors. After all, mid-December is a mighty cold time to lie on your back at night and stare at the sky (at least for most of us in the Northern Hemisphere).

But ask the majority of experienced meteor observers which meteor display they would prefer to view, and the majority will go with the Geminids, which are nicknamed the "Gems." Indeed, many skywatchers now consider these meteors to be stronger and more satisfying than the famous Perseids. The Gems are a rich meteor display that is apparently on the rise.

A good performance during prime-time hours

You don't have to wake up in the predawn hours to get an eyeful of the Geminids; they are among a small minority of showers that are quite good before midnight.

Most meteor showers are strongest just before the first light of dawn, because that's when your side of the Earth faces forward in the planet's rush along its orbit, so your side plows through meteor debris streams head-on.

Another way of saying this is that the radiant, or emanation point, of most meteor showers appears highest in the sky just before dawn. In contrast, the Geminid radiant — located near the bright star Castor in the constellation Gemini — is already a respectable 30 degrees high in the eastern sky as early as 9 p.m. (as seen from midnorthern latitudes). (Reminder: Your clenched fist held at arm's length is equal to roughly 10 degrees.)

When the radiant is anywhere close to overhead — say, by midnight — you may see as many as 100 to 120 Geminids per hour under an excellent dark sky. Keep in mind that light pollution and tall obstructions will significantly lower the number you see. When the radiant is 30 degrees up, expect about half that number — still roughly one per minute, on average. [Photos: The Geminid Meteor Shower of 2015]

Generally speaking, depending on your location, Castor begins to come up above the east-northeast horizon right around the time evening twilight is coming to an end. As Gemini is beginning to climb the eastern sky just after darkness falls, there is a fair chance of catching sight of an "Earth-grazing" meteor or two early on Wednesday evening.

Earth grazers are long, bright shooting stars that streak overhead from a point near, or even just below, the horizon. Such meteors are so distinctive because they follow very long paths nearly parallel to our atmosphere. As Gemini climbs higher into the sky, however, these very long paths will become much shorter.

Geminids are slower and more graceful than most shower meteors, which generally make swift streaks through the sky.

Moreover, Geminid meteoroids are physically firmer and more tightly packed — four times denser than the typical cometary dust flakes that supply most meteor showers — so they don't burn up quite as fast.

2017 will be an exceptional year

This year, according to the Meteor Shower Calendar of the International Meteor Organization (IMO), observing conditions for the Geminids are "almost optimal." The 26-day-old moon will be a slim (13 percent illuminated) crescent in Libra and will not rise until around 3:30 a.m. local time on Thursday morning. Moonlight will therefore be just a minor nuisance for meteor watchers.

In addition, Jupiter will be close to the crescent moon, making for a lovely celestial tableau.

The IMO says that this year's Geminid peak will come at 0630 GMT on Dec. 14 (1:30 a.m. EST), which is a half hour later than what is forecast in the 2017 Observer's Handbook of the Royal Astronomical Society of Canada. What this means for those in North America is that the constellation Gemini will be well up in the eastern sky when maximum activity is due. Indeed, for those near and along the Atlantic Seaboard, Gemini will be practically overhead!

Examination of reliably observed Geminid peaks in recent years indicates that the highest rates occur within about 2.5 hours or so to either side of the predicted times of maximum. It also predicts that the highest rates persist at only marginally reduced levels for 6 to 10 hours around their peak. So, put a big red circle on your calendar for Wednesday, Dec. 13. All through that night (local weather conditions permitting), you'll be seeing a lot of "falling stars!" [Meteor Shower Quiz: How Well Do You Know 'Shooting Stars'?]

The debris that causes the Geminid shower was apparently shed from an Apollo-class asteroid known as 3200 Phaethon.

The 3-mile-wide (5 kilometers) 3200 Phaethon is considered by some researchers to be the denuded core of what was once, in the distant past, a short-period comet. In fact, the 1.52-year orbit of 3200 Phaethon is far shorter than that of any currently active comet. Its associated Geminid meteor stream is calculated to be about 4,700 years old.

And it has only been fairly recently (relatively speaking) that Earth has begun interacting with this asteroid's trail of debris.

Unlike the Perseids, which date back nearly two millennia (to the year 36, as calculated using ancient Chinese chronicles), the Geminids were not reported until December 1862, when observers in England and the United States began noticing a few bright meteors per hour darting from the constellation Gemini. [Amazing Perseid Meteor Shower Photos by Skywatchers]

And the Gems have continued to grow stronger ever since, with rates reaching up to two per minute for people blessed with a wide-open view of a dark, star-filled sky.

Bundle up and "shower" with a friend

However, a Geminid watch is cold! You're likely going to be outside near the coldest time of the 24-hour temperature cycle. Since you're (hopefully) going to be under a wide-open, clear sky, radiational cooling will chill you even more. And unlike most things you do outside in the cold, meteor observing is motionless.

Astronomer Henry Neely, who for many years served as a popular lecturer at New York's Hayden Planetarium, wrote this about watching for the Geminids in his book "A Primer for Stargazers" (Harper and Brothers, 1946): "Take the advice of a man whose teeth have chattered on many a winter's night — wrap up much more warmly than you think is necessary!"

Indeed, expect the ambient air temperature to be far below what your local radio or TV weathercaster predicts. Heavy blankets, thick sleeping bags, ground cloths, auto cushions and pillows are essential equipment. Try an electric heating pad inside your coat.

No two observers prepare for a meteor vigil the same way. It helps to have had a late-afternoon nap, to take a shower and to wear fresh clothing. Hot cocoa, tea or coffee can take the edge off the chill, as well as provide a slight stimulus. It's even better if you can observe with a companion. That way, you can keep each other awake, as well as cover more sky.

Weather vs. Climate Change: Test Yourself

The best direction to watch is wherever your sky is darkest — probably straight up. The average brightness of a typical Geminid meteor is around second- or third-magnitude (as bright as the stars in the Big Dipper).

About 1 in 10 Geminids reach magnitude zero or brighter, and a few can be outstandingly bright fireballs or even bolides (exploding meteors) capable of casting shadows. In their guidebook "Observe Meteors," published by the Astronomical League in 1986, David H. Levy and Stephen J. Edberg wrote, "If you have not yet seen a mighty Geminid fireball arching gracefully across an expanse of sky, then you have not seen a meteor."

Yet, only about 3 percent of all Geminids leave persistent incandescent trails in their wakes. From years of Geminid watching, I personally liken them to "celestial field mice" skirting through the background stars.

About 65 percent of all Gems appear pure white, and 25 percent look yellow. The rest can appear in a variety of different hues: red, orange, blue or green. Some skywatchers say the Geminids seem brighter and more colorful during the pre-midnight hours.

And don't scorn the nights away from the peak date. The Geminids began to ramp up, with just a handful of meteors per hour, beginning on the night of Dec. 7.

On the nights leading up to the peak night of Dec. 13-14, meteor activity slowly builds, but relatively faint meteors (third magnitude or dimmer) seem to proliferate. On the night before the peak (Dec. 12-13), rates are about half that of the maximum.

After the peak night, rates drop off sharply: On the night of Dec. 14-15, you may see just one-quarter of the peak rate. However, the meteors that will be visible are decidedly brighter than those during the early stages of the display, probably because smaller meteoroids dominate at the beginning, but larger particles trail behind toward the end.

You might still catch a few late stragglers on the night of Dec. 15-16, but after that, the curtain will have lowered and the 2017 performance of the Geminids will be over.

Editor's note: If you capture a great shot of a Geminid meteor or any other night-sky view that you would like to share with Space.com for a possible story or gallery, send images and comments in to: spacephotos@space.com.

Joe Rao serves as an instructor and guest lecturer at New York's Hayden Planetarium. He writes about astronomy for Natural History magazine, the Farmer's Almanac and other publications, and he is also an on-camera meteorologist for Verizon Fios1 News, based in Rye Brook, N.Y. Follow us @Spacedotcom, Facebook or Google+. Originally published on Space.com.