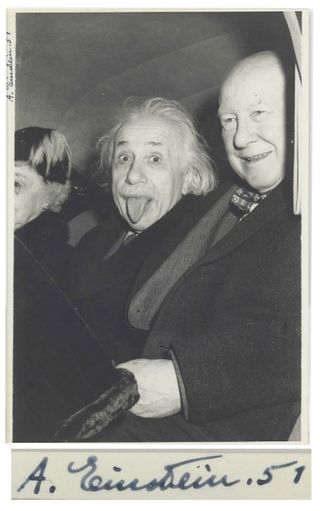 This autographed photo of Albert Einstein with his tongue out was sold at auction for $125,000.
(Image: © Arthur Sasse/Nate D. Sanders Auctions)

In 1915, Albert Einstein published his General Theory of Relativity, arguing that the universe consists of a fundamental fabric: spacetime. Moreover, he said, this fabric is warped by massive objects. The resulting bending and curving explains what we perceive as gravity.

More than one hundred years later, general relativity has proven to be the most successful framework for understanding the universe, guiding scientists to black holes, time dilation, and gravitational waves, as well as countless other discoveries.

Seven years after Einstein formulated general relativity, he also proffered another theory. This one wasn't exactly related to physics – his intellectual wheelhouse – nor was it carefully detailed in a scholarly publication. Rather, the brief musing described his recipe for happiness, and it was penned on a piece of stationery from the Imperial Hotel in Tokyo, Japan. His pockets empty, Einstein apologetically offered the note to a messenger boy in lieu of a tip, saying that it could be worth far more one day.

He was right. The note bearing Einstein's "Theory of Happiness" sold at auction last week for $1.56 million. The seller is rumored to be the messenger boy's nephew.

The highly publicized auction finally revealed Einstein's wisdom on contentment to the public ninety-five years after it was written:

It's interesting that Einstein wrote such as thing, as much of his life was dedicated to arduous, intellectually revolutionary pursuits. Perhaps he was feeling a tad overwhelmed at the time? In October 1922, when Einstein jotted down his thoughts on happiness in that Tokyo hotel, he had just been informed that he had won the Nobel Prize in Physics. No doubt the sudden publicity and fame were physically and mentally exhausting.

So how does Einstein's "Theory of Happiness" stand up after all these years? Happiness is infinitely more relative than general relativity, so it's difficult for science to offer a definitive answer. Some studies show that switching from regular employment to the frenetic life of self-employment and entrepreneurship actually leads to an increase in life satisfaction, countering Einstein's note. Another study suggested that the happiest people live a "balanced" life, working a little over seven hours per day, exercising frequently, enjoying cooked meals five times a week, and seeing their friends once per week, reinforcing Einstein's note.

One of the most in-depth scientific explorations of happiness and success was published in 2005. Researchers reviewed 225 studies and distilled that happiness more often leads to success rather than the other way around. In sum, "happiness [leads] to behaviors that often produce further success in work, relationships and health, and these successes result in part from a person's positive affect."

So perhaps it was Einstein's tranquil and reflective moments that endowed him the happiness to work so diligently and accomplish so much?

As many psychologists have observed, humans run on a "hedonistic treadmill."

"We work very hard to reach a goal, anticipating the happiness it will bring. Unfortunately, after a brief fix we quickly slide back to our baseline, ordinary way-of-being and start chasing the next thing we believe will almost certainly – and finally – make us happy," Frank T. McAndrew, a Professor of Psychology at Knox College, wrote.

That's why people who have supposedly reached the apex of happiness – lottery winners, successful entrepreneurs, and celebrities – often don't seem much happier than everybody else after growing accustomed to their situations.

At the pinnacle of scientific stardom, Einstein may have been looking down from his lofty position and feeling a tad underwhelmed. His humble "Theory of Happiness" could have been the result. So take Einstein's sage advice into account, but don't expect it to be a blueprint for satisfaction like general relativity has been for understanding the universe.