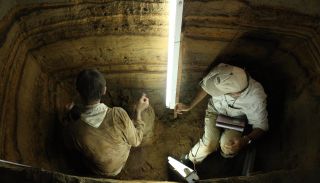 When the December 26, 2004 Indian Ocean earthquake occurred off the west coast of Sumatra, Indonesia, the 9.1 magnitude event — the third-largest tremor ever recorded on a seismograph — was so strong that it caused the entire planet to vibrate by as much as 0.4 inches. The quake triggered a series of devastating tsunamis that killed up to 280,000 people in fourteen countries, inundating some coastal communities with 100-foot-tall waves. The tsunamis are now regarded as being among the deadliest natural disasters in all of recorded history.

Motivated to better understand quake and tsunami dynamics, scientists Charles Rubin, Benjamin Horton, and their colleagues have been studying the seismic history of the region. Archaeologist Patrick Daly at the Earth Observatory of Singapore (EOS) suggested that they excavate a sea cave about 22 miles south of Banda Aceh, Sumatra. The research process involves plunging a metal cylinder approximately 23 feet into the substrate to obtain readable samples.

"As we stopped by the entrance to the cave, our first excavations did not show anything interesting," said Horton, a professor in the Department of Marine and Coastal Sciences at Rutgers University. "At this point, we returned for headlamps and excavation gear to explore the interior of the cave."

"After about fifteen minutes of excavations," he continued, "it was clear to me, Rubin, and Daly that we exposed a series of 'stacked tsunami' deposits separated by organic material that was probably deposited between earthquakes. We quickly realized that we had found a quite extraordinary record of tsunamis that stretched back thousands of years."

New analysis of the find, published in the journal Nature Communications, provides a 5,000-year-long sedimentary snapshot of tsunamis in the region. The record shows that eleven tsunamis were generated between 7,900 and 2,900 years ago by earthquakes along the Sunda Megathrust, a 3,300-mile-long fault running from Myanmar to Sumatra along the floor of the Indian Ocean.

The investigation additionally determined that there were two tsunami-free millennia during the 5,000 years, and one century in which four tsunamis struck the coast. The scientists could see that smaller tsunamis tend to occur relatively close together, followed by long dormant periods. These, in turn, tend to be followed by very strong quakes and tsunamis, such as the one that struck in 2004.

Bats love sea caves, which provide a cool and moist hideaway that is perfect for their roosts. For thousands of years, bats have therefore been visiting this particular cave.

Rubin, the study's lead author and a professor at EOS, Horton, and their team discovered that organic debris from the copious quantities of guano is present above each of the eleven identified historic tsunami beds. It neatly marks each off, like lines of icing in a layer cake.

The scientists knew what a tsunami bed looks like in the area because they extensively studied the one left behind after the 2004 disaster. It, and the eleven ancient beds, all consist of fine-grained sand, pieces of shale, and mudstone known as "rip-up clasts," weathered cave chalk, and abundant numbers of preserved tiny marine animals, mostly originating from the ocean depths.

"We were able to refine the timing of past tsunamis with radiocarbon dating," Rubin said, adding that a statistical model further "allowed us to understand the uncertainties of timing between events, and we were able to make a comparison between our record of past tsunamis to other sites around the Indian Ocean."

He and his team believe that the Sunda — also called Sumatra — Megathrust is the most likely source for triggering both earthquakes and tsunamis, at least in this region. In other areas, volcanic eruptions and underwater landslides may also lead to similar events.

As for why smaller tsunamis sometimes occur relatively close together, Rubin said, "The closely spaced tsunamis perhaps represent temporal clustering of earthquakes that produced tsunamis. It seems that earthquakes during this period are separated by just a few decades."

RELATED: A Big Earthquake Can Trigger Others in Minutes

The take-away messages from the research for those hoping to prepare for future tsunamis are twofold. First, the scientists have shown via their newly discovered sedimentary record that earthquakes tend to cycle from larger to smaller events. They were not surprised, for example, that some 2,000 years went by without a single major tsunami. The problem is that pressure can build up over such time, leading to even bigger future natural disasters.

Second, the remarkable variability of tsunami recurrence suggests that regional hazard mitigation plans should be based on the high likelihood of future destructive tsunamis, rather than on estimates of recurrence intervals. As the new paper reports, big tsunamis vary in recurrence time from only 60 years to about 2,000 years.

"Although our study is the first to use a new depositional environment — the sea cave — for reconstructing tsunami records, it will take many more high quality records to understand how a single offshore fault can produce such a varied history of tsunamis," Rubin said.

"We continue to work on the cave to estimate the power of the tsunami waves that flooded the cave over the last 8,000 years," he added.