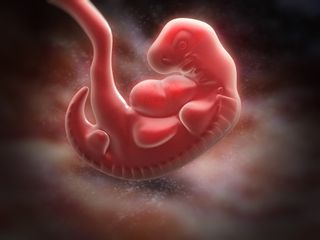 Humans can't seem to keep a tail, suggests new research that finds our early ancestors lost tails not just once, but twice.

The findings, published in the journal Current Biology, not only help explain why people don't wag dog-like tails, but they also shed light on why we all have a tailbone and begin life with an actual tail that gradually disappears.

"Fleshy tails go all the way back to the earliest vertebrate ancestors and are found in very young embryos, so it would be very difficult to get rid of them entirely without causing other problems," author Lauren Sallan told Seeker. "As a result, both fishes and humans have had to stunt growth instead, leaving a buried, vestigial tail much like the legs of whales."

RELATED: Do We Still Need Women to Make Babies?

The origins of this mysterious vestigial tail go back to fish. For the study, Sallan, an assistant professor in the University of Pennsylvania's Department of Earth and Environmental Science, analyzed 350-million-year-old hatchlings of the fossil fish Aetheretmon. This jawed fish distant ancestor of terrestrial animals today had both a scaly, fleshy tail and a flexible tail fin, sitting one atop the other.

Sallan found these structures were entirely separate. By comparing the Aetheretmon hatchlings with those of living fish, she found that the two "tails" started out one atop the other and then grew on their own. This discovery overturns at least two centuries of scientific belief that the modern adult fish tail fin was simply added to the end of an ancestral tail shared with land animals.

The disconnect means that the two tails went on their own evolutionary paths. Fish lost the fleshy tail and kept the flexible one to improve their swimming. Having just the back fin, she explained, "allows for more refined movements, which a muscular tail (originally present for power swimming) would disrupt."

Fish that evolved to become semi-aquatic and then land-dwelling animals lost the flexible back fin, but kept the fleshier one that over time became the familiar appendage we now see on dogs, cats, cows and many other animals. As dogs show, tails are useful for visual communication, slapping away flying insects and other functions.

RELATED: Dogs Remember Even the Stupid Things We Do

Adult apes, including human ancestors, took the tail loss process a step further, Sallan said, "losing the remaining bony tail for better upright movement. Like fish, the remnants of an embryonic bony tail are buried in our lower backs—the coccyx or tailbone—stunted by a loss of molecular signals that would otherwise cause it to grow out like an arm or leg. Thus, humans and fish embryos share mechanisms for controlling tail form."

The fossil record for early apes is not great, but since apes lack tails, she thinks our primate ancestors lost them when they first started to walk on two legs. Monkeys that often walk this way have stunted tails, further proving that tails can get in the way of moving around while upright.