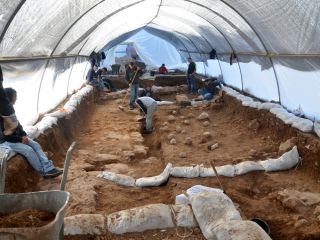 The excavations, which took place in Jerusalem Russian Compound, revealed a thick wall, believed to be the city's "Third Wall," described by the historian Josephus.
(Image: © Yoli Shwartz, courtesy of the Israel Antiquities Authority)

Archaeologists say they've found evidence of a battlefield from the Roman emperor Titus' siege of Jerusalem in A.D. 70.

Recent excavations revealed a section of the so-called "Third Wall" of Jerusalem that Titus' army breached on its way to conquering the city, according to the Israel Antiquities Authority (IAA).

Outside the wall, the archaeologists found that the ground was littered with large ballista stones (stones used as projectiles with a type of crossbow) and sling stones, suggesting that this area had been under heavy fire from Roman siege engines. [See Photos of the Ancient Roman Battlefield]

These archaeological remains were unearthed last winter at the site where the campus of the Bezalel Academy of Arts and Design is to be built, in an area of the city that is known today as the Russian Compound, IAA officials said.

"This is a fascinating testimony of the intensive bombardment by the Roman army, led by Titus, on their way to conquering the city and destroying the Second Temple," the excavation directors, Rina Avner and Kfir Arbib, said in a statement from the IAA. "The bombardment was intended to attack the sentries guarding the wall and provide cover for the Roman forces so they could approach the wall with battering rams and thereby breach the city's defenses."

An eyewitness to the war, historian Flavius Josephus, wrote the seminal account of the Roman siege of Jerusalem, which included key details about the Third Wall.

Josephus said the wall was built to protect a neighborhood called Beit Zeita, which was built outside the city's boundaries at the time. The construction was started by Agrippa I, King of Judea, and was finished two decades later to help fortify the city as Jewish rebels prepared to revolt against Rome in A.D. 66.

Ultimately, the uprising against Rome was unsuccessful, and in A.D. 70, the Romans took back Jerusalem and destroyed much of the city, including the Second Temple.

The newly uncovered section of the wall is 6.2 feet (1.9 meters) wide. Pottery discovered at the site suggests that this battlefield dates back to Roman times, the archaeologists said. They also discovered the remains of a watchtower along the wall.

The new findings could help settle some debate about the exact location of the Third Wall, which has been going on ever since archaeologist Edward Robinson claimed to have found a portion of the wall in 1838. The discoveries will be presented next week at the New Studies in the Archaeology of Jerusalem and its Region conference.