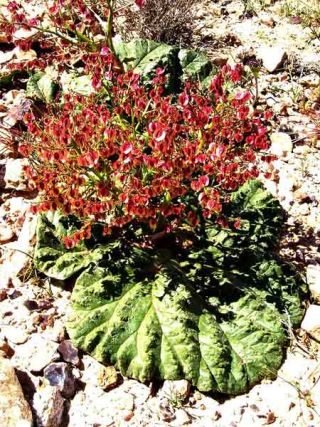 Researchers from the University of Haifa-Oranim have managed to decipher the unique self-watering mechanism of this plant in the Negev desert, which harvests 16 times more water than other plants in the region.
(Image: © Prof. Gidi Ne'eman, University of Haifa)

Any wannabe gardener would appreciate a plant that waters itself. Now research shows how one plant does this: The desert rhubarb plant captures 16 times more liquid from its bone-dry surroundings than neighboring plants. In a place that receives an average of just 3 inches (75 mm) of rainfall a year (the desert rhubarb grows in the mountains of Israel's Negev desert), every drop of water counts. And so desert plants have evolved ways to stay hydrated, including sporting tiny leaves to reduce the surface area exposed to the sun's water-zapping rays. The rhubarb plant (Rheum palaestinum), however, takes an entirely different approach: Its huge leaves funnel water to its single root. Here's how its thirst-quenching trick works: With one to four leaves arranged in a rosette, from a distance, the plant looks a bit like a hardy piece of kale. But up close, it can be seen that each leaf, which can measure up to about 28 inches (70 cm), is etched with deep depressions and ridges. As a whole, the leaves function like the mountainous topography of the region, albeit on a smaller scale. Like the mountains and valleys that might route water into a river, the plant's leaves channel rainwater toward the ground surrounding the rhubarb plant's root. The leaves are also coated with wax, which helps to quicken the water flow toward the sunken parts of the leaves and from there to the root. Most neighboring plants simply survive on the rain droplets that directly penetrate the ground around them. Simcha Lev-Yadun and colleagues from the University of Haifa-Oranim in Israel discovered this phenomenon in the field, where they noticed the leaves' odd-looking surfaces. After running lab experiments and analyzing the rhubarb plant's growth, the researchers found the plant could harvest quantities of water similar to that of Mediterranean plants, where annual rainfall can reach 17 inches (426 mm). When the team watered the rhubarb plant artificially, they found that water flowed along the course of the leaves' depressed veins to the ground surrounding the root and then quenched the ground to a depth of 4 inches (10 cm) or more. "We were surprised because [the phenomenon] was not known, because it is so beautiful, and because very good scientists that were our teachers and mentors knew the plant and missed the principle," Lev-Yadun told LiveScience. The newly discovered phenomenon is detailed in the March issue of the journal Naturwissenschaften.