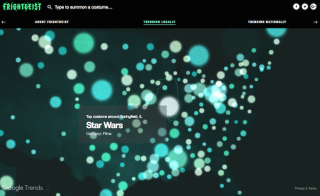 Not sure what to be for Halloween? Google may be able to help.

A new Google Trends tool shows you what costumes are popular right now in your area and around the country, so you can be sure to wear something more original than, say, a Stormtrooper costume to this weekend's festivities.

Dubbed Frightgeist, the Google tool takes the 3 billion search queries typed into Google every day and filters out costume-related inquiries. Then, the tool maps the top 500 costume searches throughout the United States. You can use the tool to see what costumes are trending on the national level, or you can find out what costumes are hot right now, anywhere from San Francisco (anything Star Wars) to Scranton, Pennsylvania (Poison Ivy). [DIY Halloween Costumes: 7 Geeky Getups for Any Party]

But if you want to look like everyone else this Halloween, then go out and buy a Harley Quinn costume. Also known as Dr. Harleen Frances Quinzel, this supervillain is best-known as an adversary to Batman and a bosom buddy of the Joker. She'll make an appearance in the upcoming movie "Suicide Squad," and she will also most certainly be at any Halloween party you attend this weekend.

"Star Wars" takes second place on this year's most wanted costume list, but the movie characters you see trick-or-treating in your neighborhood will depend on where you live. If you call Monterey, California, home, you'll be sure to see a few Luke Skywalkers roaming the streets, and the force will also be strong in Louisiana, where Jedi searches abound. However, Darth Vader will be lurking in the colder northern states, most notably Michigan and Ohio.

While many of this year's most popular getups have their roots in Hollywood blockbusters or comic book sensations, there are also a number of more traditional costumes on Google's list. Hippies are all the rage in Colorado this year, for example. And in Honolulu, pirates are the costume of choice. Owls are a hit in Oklahoma.

Oh, and if you're afraid of clowns, steer clear of Portland, Maine.