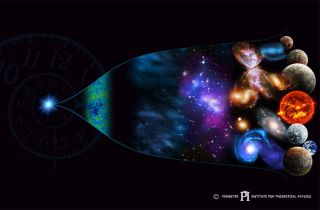 In a recent study published in the journal Physical Review Letters, a group of theoretical physicists re-investigate the “Arrow of Time” — a concept that describes the relentless forward march of time — and highlight a different way of looking at how time manifests itself over universal scales.

Traditionally, time is described by the “past hypothesis” that assumes that any given system begins in a low entropy state and then, driven by thermodynamics, its entropy increases. In a nutshell: The past is low entropy and the future is high entropy, a concept known as thermodynamic time asymmetry.

In our everyday experience, we can find many examples of increasing entropy, such as a gas filling a room or an ice cube melting. In these examples, an irreversible increase in entropy (and therefore disorder) is observed.

If this is applied on a universal scale, it is presumed that the Big Bang spawned the Universe in a low entropy state — i.e. a state of minimum entropy. Over the aeons, as the Universe expanded and cooled, the entropy of this large-scale system has increased. Therefore, as the hypothesis goes, time is intrinsically linked with the degree of entropy, or disorder, in our Universe.

But there are several problems with this idea.

ANALYSIS: A Laser to Give the Universe a Hernia?

Just after the Big Bang, several lines of observational evidence point to a Big Bang environment that was a hot and extremely disordered mess of primordial particles. As the Universe matured and cooled, gravity took over and made the Universe more ordered and more complex — from the cooling clouds of gas, stars formed and planets evolved from gravitational collapse. Eventually, organic chemistry became possible, giving rise to life and humans that philosophize about time and space. On a Universal scale, therefore, “disorder” has effectively decreased, not increased as the “past hypothesis” presumes.

This, argues co-investigator Flavio Mercati of the Perimeter Institute (PI) for Theoretical Physics in Ontario, Canada, is an issue with how entropy is measured.

As entropy is a physical quantity with dimensions (like energy and temperature), there needs to be an external reference frame so they can be measured against. “This can be done for subsystems of the universe because the rest of the universe sets these references for them, but the whole universe has, by definition, nothing exterior to it with respect to define these things,” Mercati wrote in an email to Discovery News.

So if not entropy, what could be driving universal time forward?

Complexity is a dimensionless quantity that, in its most basic form, describes how complex a system is. So, if one looks at our Universe, complexity is directly linked with time; as time progresses, the Universe becomes increasingly structured.

“The question we seek to answer in our paper is: what set these systems in that very low-entropy state in first place? Our answer is: gravity, and its tendency to create order and structure (complexity) from chaos,” said Mercati.

To test this idea, Mercati and his colleagues created basic computer models to simulate particles in a toy universe. They found that, no matter how the simulation was run, the universes’ complexity always increased, and never decreased, with time.

From the Big Bang, the Universe started in its lowest-complexity state (the hot ‘soup’ of disordered particles and energy). Then, as the Universe cooled to a state that gravity began to take over, gases clumped together, stars formed and galaxies evolved. The Universe became inexorably more complex, and gravity is the driving force of this increase in complexity.

“Every solution of the gravitational toy model we studied has this property of having somewhere in the middle a very homogeneous, chaotic and unstructured state, which looks very much like the plasma soup that constituted the universe at the time the Cosmic Microwave Background was created,” said Mercati. “Then in both time directions from that state gravity enhances the inhomogeneities and creates a lot of structure and order, in an irreversible way.”

As the Universe matures, he added, the subsystems become isolated enough so that other forces set up the conditions for the ‘classical’ arrow of time to dominate in low-entropy subsystems. In these subsystems, such as daily life on Earth, entropy can take over, creating a “thermodynamical arrow of time.”

Over Universal scales, our perception of time is driven by the continuous growth of complexity, but in these subsystems, entropy dominates.

“The universe is a structure whose complexity is growing,” said Mercati in a PI press release. “The universe is made up of big galaxies separated by vast voids. In the distant past, they were more clumped together. Our conjecture is that our perception of time is the result of a law that determines an irreversible growth of complexity.”

The next step in this research would be to look for observational evidence, something Mercati and his team are working on. “…we don’t know yet whether there is any (observational) support, but we know what kind of experiments have a chance of testing our idea. These are cosmological observations.”

For now, he hasn’t revealed what kinds of cosmological observations will be investigated, only that they will detailed in an upcoming, and likely fascinating, paper.