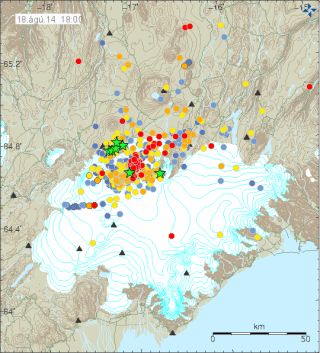 The orange alert is the fourth level on a five-grade scale, and signifies that an volcanic eruption is possible but not imminent.

The earthquake activity started suddenly on Aug. 16 and has been nearly continuous since then, with most tremors less than magnitude 3 in size, which can rarely be felt by people at the surface. A magnitude-4 earthquake struck today, the strongest in the region since 1996.

The shaking is focused in two different seismic swarms: one to the east of the Bardarbunga caldera (a bowl-shaped volcanic feature), and one at the edge of Dyngjujökull glacier. [Fire and Ice: Images of Volcano-Ice Encounters]

The earthquakes indicate magma moving underground through fractures, a process called dyke intrusion, according to a statement from Iceland's Met Office. The molten rock has reached within 6 miles (10 kilometers) of the surface, the Met Office said.

"The clues from the pattern of earthquakes show that seismic energy is being expended in two main clusters — one to the northeast on the glacier margin, and one to the east under the ice," Dave McGarvie, a volcanologist at the Open University in Scotland, said in a statement. "The good news for air travel is that both these clusters are away from the heart of the main volcano, as it's in the heart that the kind of magma is produced which leads to highly explosive eruptions that produce the abundant fine ash capable of being transported long distances through the atmosphere."

An eruption at the remote Bardarbunga volcano doesn't immediately threaten any Iceland communities, as the surrounding area is uninhabitated, but an ash plume could shut down flights in Europe. The 2010 eruption of Iceland's Eyjafjallajökull volcano closed airports for six days, stranding passengers and costing airlines $1.7 billion in lost revenues.

An eruption in 1910 is also linked to a nearby fissure system connected to Bardarbunga's magma supply. There may have been smaller eruptions since, concealed beneath its thick cover of ice. Bardarbunga is buried beneath the Vatnajökull glacier. An eruption could melt part of the glacier, triggering a jökulhlaup, a massive and unexpected meltwater flood.