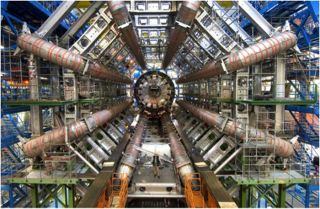 Most people probably wouldn't think wouldn't think particle physics would ever make for an edge-of-your-seat drama. But it has in Particle Fever — a suspenseful, easy-to-understand documentary that chronicles the search for the Higgs boson, which could potentially explain the origin of all matter. More than 10,000 scientists from more than 100 countries at the Large Hadron Collider (LHC) conducted the search. Their goal: to recreate conditions that existed moments after the Big Bang — as necessary to find the elusive Higgs particle. [Photos: The World's Largest Atom Smasher (LHC )]

Partially funded by the National Science Foundation (NSF), the documentary also showcases the very human side of physicists who contributed to the experiment — some of whom devoted their entire careers to it.

While discussing the LHC — the biggest machine ever built — as well as the setbacks, challenges and pressures of conducting such a grand experiment, the researchers convey a contagious enthusiasm. As David Kaplan, an NSF-funded researcher who co-produced the movie, said, "It could be nothing other than just understanding everything." [Gallery: Search for the Higgs Boson ]

Check out the movie trailer. The film has already opened in cities in the west and east coasts of the U.S. and will open in Washington, D.C. on March 21st.

Editor's Note: Any opinions, findings and conclusions or recommendations expressed in this material are those of the author and do not necessarily reflect the views of the National Science Foundation. See the Research in Action archive.