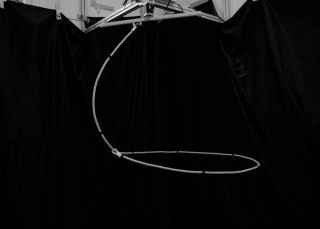 DENVER - Aspiring cowboys take note: If you want to learn to lasso, you've got to start big.

The ideal lasso for rope tricks has a large loop, making up 70 to 75 percent of the total rope length, according to new physics research. Thus, the beginner's urge to start small and work up will only shoot you in the foot, according to study researcher Pierre-Thomas Brun, a physicist at the Swiss Federal Insitute of Technology in Lausanne

Other trick-rope tips include picking the right rope and finding the perfect rotation speeds for the hands, Brun told reporters last week (March 5) here at the March meeting of the American Physical Society. [Video: Trick-Roping Physics]

Brun researches the physics of elastic threads, a category that includes everything from DNA to human hair to transoceanic cables — and rope. He and his colleagues built a trick-roping robot, the "robo-cowboy," that spins a lasso to study the physics of tricks both simple and complicated. They also videotaped professional trick-roper Jesus Garcilazo performing complex tricks such as the "Texas Skip," which involves a cowboy creating a large vertical rope loop and jumping back and forth through it. The findings could have applications in textile manufacturing and in computer graphics.

So far, Brun and his colleagues have delved into the math of the simplest rope trick, the flat loop, a horizontal spinning loop. They have found that the length of the non-looped portion of the rope (called the spoke) determines the shape of the loop when spinning. A long spoke creates what Brun calls "whirling mode," a nearly closed loop rotating horizontally. Move your hand down the spoke to shorten it, and the loop opens and flattens into a flat loop. Shorten the spoke even more and the loop continues to spin but opens vertically, looking much like a clothes hanger. The researchers dubbed this shape "the hanger."

Brun demonstrated the tricks for reporters at the APS meeting using a length of ball chain, which he recommends as a starter rope for trick-rope beginners. Further research will be necessary to understand the physics of more complex tricks, including the Texas Skip.