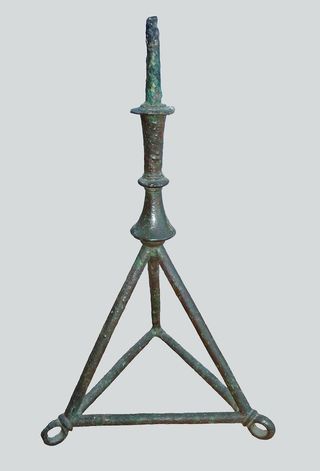 A 10th-century candelabra found off the coast of the Spanish island of Ibiza may be a clue to long-forgotten shipping routes in that era.

But the candelabra's use and origin remain a stubborn mystery, researchers report in the journal Archivo Español de Arqueología. A new dive to the spot where the object was found in the 1970s revealed no real clues, so there is no context for understanding the find. Because the candelabrahas been in the hands of private collectors, its restoration was also done differently than if it had been found by academic archaeologists.

"We are uncertain of its symbology and precise use," study leader Marcus Hermanns, of the German Archaeological Institute, in Madrid, said in a statement. "For instance, it shows no traces of burning … because it was restored differently from those found in investigations. However, it was worthwhile to make the study known to the scientific community, because it might give clues on the importance of Ibiza in navigation routes." [The 7 Most Mysterious Archaeological Finds on Earth]

Little is known about trade routesaround the Mediterranean island in the 900s, the researchers said. There have been several shipwrecks discovered from the era in southern France. There was apparently a shipping route between the Iberian Peninsula, which includes modern-day Spain and Portugal, and southern France, Hermanns said. Old documents record the existence of an Islamic colony called Fraxinetum or Fraxinet in what is now the Provence region of France. This colony was said to be settled by Muslim pirates from Spain, further cementing the link between the two regions. The sunken vesselsmay be supply ships to the colony, Hermanns said.

The candelabra is bronze; there are few other objects like it, and none from the Ibiza region. Hermanns analyzed the candelabra as part of a larger project to document archaeological sites and pieces found in the Mediterranean off the coast of Spain. He and his colleagues tried to dive at the site where the piece was found to see if other artifacts might remain. However, the sandy sea bottom off the island yielded nothing, either because nothing else is there or because the currents pushed sand over anything left.

"You can be unlucky because the site could be covered [by sand] on the day you are diving," Hermanns said.