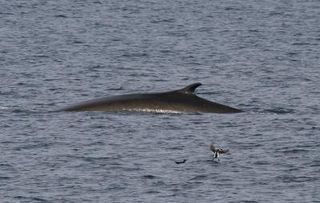 Microphones submerged in the waters of the Bering Strait recorded an increasing number of whale calls from 2009 to 2012, including some from whales that normally live further south. The whales may have expanded north as the Arctic warmed and the animals’ populations recovered from hunting.

The increase in whale numbers coincided with more ship traffic in the region. More shipping could lead to whales being injured or killed in collisions and interfere with whale communications.

Along with native Arctic whales including belugas and bowheads, the microphones recorded the songs of sub-Arctic whales, such as humpbacks, minkes, fins and orcas. Oceanographer Kate Stafford of the University of Washington will present the findings Wednesday at the Ocean Sciences Meeting in Honolulu.

The microphones recorded humpbacks’ melodious songs into late autumn. And oceanographers observed fin and minke whales from July to September, and their vocalizations were recorded into early November.

The northern seas provide more hospitable habitat for southern species, as the far north warms quicker than the rest of the planet and sea ice retreats.

“It’s not particularly surprising to those of us who work up in the Arctic,” Stafford said in a press release. “We are seeing and hearing more species, farther north, more often. And that’s a trend that is going to continue. These animals are expanding their range. They’re taking advantage of regions in seasons that they may not have previously.”

The trend could also be tied to the end of most commercial whaling in the Arctic and northern Pacific Oceans. Russian whaler’s ship logs record the sub-Arctic species in the region during the mid-to-late 20th century, according to the abstract of Stafford’s presentation. The whales may be returning to previously lost territory.

“The question is, are these whale populations recovering and so they’re reoccupying former habitat, or are they actually invading the Arctic because they can, because there is less seasonal sea ice?” Stafford said.

The whales aren’t the only ones increasing traffic in Arctic waters. More commercial shipping vessels now take advantage of the widespread disappearance of sea ice to navigate a northern shortcut between North America, Europe and Asia.

The warmer Arctic also makes it easier for oil and natural gas exploration of the seafloor. More cruise ships also visit the Arctic now. Ship traffic and resource extraction can pollute the waters with both chemicals and noise — the racket created by humans interferes with the whales’ vocal communications.

Using knowledge of the whale’s biology could allow ships to avoid colliding with the massive mammals. For example, tracking studies observed that bowhead whales travel north on the eastern side of the Bering Strait in spring, then return south on the western side in autumn. Seasonal shipping routes could be organized to avoid areas where whales travel.