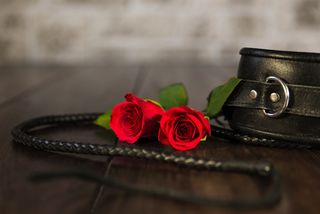 Sadomasochism, or sexual enjoyment from giving or receiving pain, may be a meditative experience and in some cases may lead to an altered state of consciousness, new research suggests.

If sadomasochism is not a pathology as once believed, the question is why some people engage in these painful sexual behaviors, said James Ambler, a graduate student in psychology at Northern Illinois University.

The gain from pain

To find out, Ambler recruited "switches," or people in the SM community who like both receiving pain and giving pain. Fourteen switches, 10 of whom were women, agreed to be assigned one of those two roles for the night by roll of the die.

Before and after their sexual experience, the volunteers completed a cognitive test called the Stroop task, in which they saw a word for a color written in a color other than what the word said ("blue" written in red, for example). It's hard for the brain to read the word correctly when the color of the letters clashes with the meaning, making this a widely used test of cognitive abilities. The volunteers also filled out questionnaires about their feelings of "flow" during the sadomasochistic experience. Flow is a state of focus and enjoyment that people feel when fully immersed in a task.

The results showed that people playing the pain-receiving role showed poorer Stroop task scores, which are seen with short-term reductions of functions in a part of the brain called the dorsolateral prefrontal cortexAmbler said. This region is linked to executive control, working memory and other higher-level functions.

The pain that comes with sadomasochistic sex may cause the brain to shunt blood flow away from this region, causing a subjectively altered state of consciousness — and the appeal of SM, Ambler said.

"Part of the reason these SM activities may be so extreme, at some level, is that they're particularly effective at causing the brain to change its distribution of blood flow," he said. [51 Sultry Facts About Sex]

People on the giving end of the pain got benefits, too. Both sides of the equation reported similar levels of flow during their sexual "scene."

Called the "Dance of Souls," this ritual involves people getting temporary skin piercings, through which hooks attached to ropes are placed. The ropes of one person are connected to those on others in the group or to a fixed object and are pulled taut as music or drums are played. These events are also known as "energy pulls" and are seen as primarily spiritual, not sexual, Sagarin told Live Science.

The researchers surveyed 22 participants in one of these rituals at a kink community conference in California. Five participants who were hooked agreed to participate, as well as nine supporters (who make sure group members are OK during the ritual) and eight observers. The participants filled out surveys about their stress, emotions, flow and the extent to which they felt their own selves overlapped with others at the event. They also gave saliva samples to test their cortisol, a hormone that spikes during stress.

Unsurprisingly, given the pain, cortisol levels went up during the ritual. But something odd happened: Participants reported feeling less stressed.

"We see this interesting disconnect," Sagarin said. "We think this may be indicative of the types of altered states of consciousness people might be seeking."

The effect might not be so different from what people experience when they push their bodies during yoga, or even during meditation, he said. People who complete the energy pull ritual also report feeling more connected to others, he added.

The brain effects Ambler found might provide an explanation. The dorsolateral prefrontal cortex is responsible, in part, for distinguishing self from other, he said. If less blood flows to the brain during these intensely painful experiences, the result may be a feeling of oneness.

The researchers hope that future research will involve closer, minute-by-minute monitoring of participants to delve into how the physiological and the psychological are linked. The findings are interesting both because they illuminate that link and because sadomasochism may not be quite as fringe as psychologists once thought, the researchers said.

"Research would suggest that a substantial minority of people do either fantasize or participate in these activities," Sagarin said. "There is relevance to it in terms of the number of people either directly or indirectly involved."

The researchers presented their findings last week at the annual meeting of the Society for Personality and Social Psychology in Austin, Texas.

Editor's Note: This story was updated at 10:00 a.m. Eastern Time Feb. 20 to include credit for Ellen Lee for her research on the Dance of Souls.