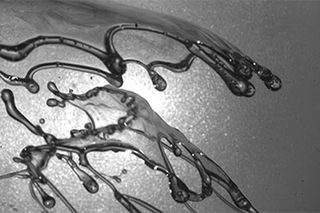 (ISNS) -- Pour water on your hands, and then clap them together. Much of the fluid on your skin will fly off in a rain of small droplets. It's a scenario so familiar that you've probably never asked why the liquid behaves this way.

“How does this thin film on your hand become a droplet when you clap your hands?” asked Sunny Jung, an engineer at Virginia Tech, in Blacksburg.

It's not an idle question. Understanding the behavior of clapped fluids can help researchers in fields varying from drug development to oil extraction.

To better understand the physics of clapping wet hands, Jung and other scientists built an apparatus that compressed liquid between two flat, round plates. They deposited a precise amount of a fluid, such as silicon oil, on the bottom plate, and then pressed down the top plate at a set velocity.

The researchers ran their apparatus under different conditions, varying the gooeyness of the fluid and the velocity of this controlled mechanical clap. Meanwhile, a high-speed camera revealed the fluid's beautiful response.

First, the liquid gushes out from the plates in a thin film, taking the shape of a bell. Thanks to a well-aimed light, you can see a thick rim that forms, hanging in fringes like the edge of an umbrella. Finally, the tips of these fringes pinch off into individual droplets.

The splash recorded by the high-speed camera matched the predictions of the researchers' mathematical model, which they published in Physical Review E. According to this model, the behavior of the fluid was governed primarily by surface tension.

Surface tension is the force that pulls a fluid into the most compact shape possible. You can see its effect when you let a faucet release a long stream of water. Close to the faucet, the water takes a cylindrical shape. But a cylinder has more surface area than, say, a sphere of the same volume. So as gravity pulls the water down, surface tension breaks it up into spherical drops.

In Jung's experiment, after the plates crash together, the bell-shaped splash forms a cylindrical rim. And like the cylinder of water from a faucet, this rim also transforms into spherical drops under the influence of surface tension.

“This is a way to master surface tension,” Jung suggests. “By looking at the fluid sheet, when this drop is formed, we can back-calculate what is the surface tension of this fluid.”

Knowing the surface tension of a given fluid is important in the research lab, as well as in fields like the food industry. For example, the presence of contaminants can cause changes in the thickness and surface tension of liquid edibles like soup.

However, there already is a tool for measuring surface tension: a device called a tensiometer. “Surface tensiometers are standard equipment,” commented Karen Daniels, a physicist at North Carolina State University, in Raleigh. “It would be nice to have alternatives sometimes, but I can’t think of a situation where I’d rather make splashes. I don’t know of an industrial application where there’s a need for a new surface-tension-measuring technique.”

This technique may not be necessary in a lab setting, but it could be useful out in the field. Often, after industrial accidents occur, researchers have to gather information based on photographs and video evidence. And with the new method, they might be able to calculate the surface tension of an unknown fluid based on photos and video footage.

Although the physics of clapping wet hands provides a reliable way to measure surface tension, this application is unlikely to be revolutionary. However, the study does reveal another surprising fact.

When droplets form at the edge of the curved splash, you'd expect the number of them to vary. But it doesn't. Neither the thickness of the fluid nor the speed at which the plates collide will affect the number of droplets.

“Astonishingly, the thing they’re calling the wave angle—the number of droplets you get around a circle—is independent of any fluid,” Daniels pointed out. “As people design devices that shed water and so forth, it’s good to know that you can’t do better than a certain number of droplets, or alternatively that you can’t do worse. You’re always going to get a dozen droplets around the circle, regardless of the fluid parameters.”

Inside Science News Service is supported by the American Institute of Physics. Sophie Bushwick is a freelance science writer based in New York City. Her work has appeared in numerous print and online outlets.