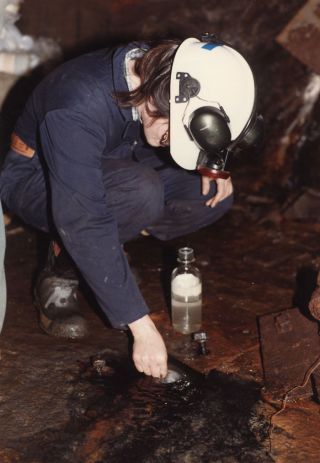 A scientists takes a sample of water from a mine deep underground in Ontario, Canada. The water turned out to be 2.6 billion years old, the oldest known water on Earth.
(Image: © B. Sherwood Lollar et al.)

Last month, scientists announced they had found an ancient pocket of water buried in a mine 2 miles below Earth's surface. The water, up to 2.6 billion years old, may have been around longer even than multicellular life. The find raises intriguing possibilities for understanding how life arose on Earth and if it could survive on other planets. But the really burning questions is, of course, what does it taste like?

"It tastes terrible," Barbara Sherwood Lollar, one of the scientists behind the study, told The Los Angeles Times in an interview.

Lollar explained that because the water has interacted with the rock around it, it is extremely salty. "It is much saltier than seawater," Lollar, a geoscientist at the University of Toronto, told the paper. Lollar also says the water is much more viscous than the tap water most of us are used to. And while the water is clear when it first emerges from the ground, the minerals within it, particularly iron, react with oxygen molecules in the air and turn the water an orange-y color. "You would definitely not want to drink this stuff," she said.