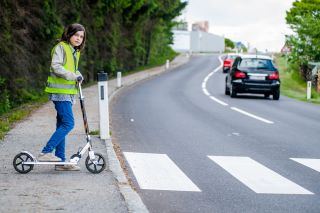 Three behaviors put children at higher risk for being hit by a car, a new study finds.

Increasing parental supervision and educating kids on how to cross safely, as well as reducing common distractions could play an important role in preventing accidents, the researchers said.

Dr. Nina Glass, of New York University's Langone School of Medicine, and colleagues analyzed information from about 1,075 people who were struck by cars and treated at the researchers' hospital between 2008 and 2011. Of these, 145 were under 18 years old.

Of the 39 children in the study under age 6, 17 were injured when they darted into the middle of the street, and 14 were hurt during a mid-block crossing. In all cases, the children were supervised at the time of the accident.

In comparison, 18 percent of the adult accidents occurred while pedestrians were crossing in the middle of the street, 15 percent during alcohol use and 9 percent during electronic device use.

The study will be presented today (Oct. 19) at the annual American Academy of Pediatrics meeting in New Orleans.