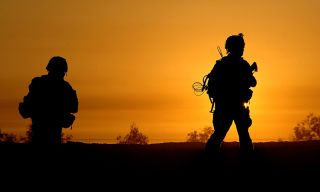 The case of a U.S. Army soldier who died in New York after likely contracting rabies from a dog bite in Afghanistan calls attention to the risk of rabies during travel or deployment to certain countries, and the importance of administering the rabies vaccine promptly to anyone who may have been exposed to the virus, according to a report of the soldier's death released today (May 3).

The 24-year-old soldier's death, which occurred in August 2011, was the first rabies death among U.S. service members since 1974, the report from the Centers for Disease Control and Prevention said.

Unless the rabies vaccine is administered after exposure, an infection with rabies virus, which targets the nervous system, is nearly always fatal.

On Aug. 19, the solider was admitted to a New York emergency room with right arm and shoulder pain, nausea and vomiting. He tested positive for rabies. Although doctors administered an experimental treatment, the soldier died on Aug. 31.

The soldier had told family and friends that he'd been bitten by a feral dog in Afghanistan in January 2011, and had sought medical treatment, which he described as wound cleansing and injections. However, an Army investigation revealed no documentation of a reported bite wound or treatment, the CDC report said.

Twenty-nine people who were in close contact with the soldier, including health-care personnel, received the vaccine.

The case also highlights the need for the global elimination of rabies in dogs, the report said. Canine rabies is responsible for the majority of rabies deaths worldwide.

In the U.S., 45 cases of rabies were reported between 1996 and August 2011, and 10 of those cases were likely caused by dog bites. All 10 occurred overseas but were reported in the U.S., the report said.

People traveling should be aware of rabies risks, and should keep a safe distance from wild and feral animals, the report said. Travelers receiving bites or scratches from such animals should wash the wound thoroughly with soap and water, and promptly seek medical attention.

Human-to-human transmission of rabies has not been documented (with the exception of transmission through organ transplantation), the report said, but is theoretically possible, because the virus can present in saliva and tears, along with cerebrospinal fluid and neural tissue.

Pass it on: The death of soldier from rabies highlights the importance of receiving the rabies vaccine after a possible exposure to the virus.