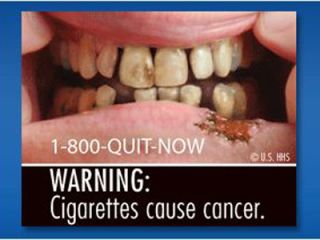 One of the new images selected by the FDA to appear on cigarette packages.

Smokers deprived of their nicotine kick are more fearless than nonsmokers, according to a new German study.

The study required heavy smokers to abstain from smoking, and showed they had less activity in their brain's "fear center" in response to scary images than nonsmokers, the researchers say.

The findings suggest labels recently placed on cigarette packs depicting the consequences of smoking, including graphic images of smokers' lungs and tumors, will do little to deter smokers from lighting up, the researchers said. [See Images: New Cigarette Labels Unveiled by the FDA ].

"In those who stop smoking, the activity of the fear center has been lowered so much that they are not very receptive to the scary photos," said study researcher René Hurlemann, of the University of Bonn in Germany.

The results were published online May 26 in the journal Human Brain Mapping.

Each participant was shown photos of happy, fearful and neutral faces while their brain activity was recorded. The researchers were particularly interested in the amygdala, or the brain's fear center.

When the smokers were allowed to appease their addiction, there were no differences between the two groups in terms of their brain activity, Hurlemann said.

However, when the smokers came off a 12-hour abstinence period, the picture changed. "After only a few hours of abstinence, the activity of the fear center was far lower, as compared to the earlier state," when looking at the fearful images, said study researcher Özgür Onur of the University of Köln. "They simply were indifferent to images of fearful people," Onur said.

This lack of fear is problematic, the researchers say. "Fear is an archaic instinct that protects us from doing things that are dangerous," Onur said.

But smokers who have recently been abstinent do not show that normal fear response. "It seems that they are mentally caught up in their addiction, resulting in a lowered receptivity for fear-inducing stimuli," Onur said. "It seems that smokers need nicotine in order to maintain the normal function of their amygdala," Onur said.

Hurlemann doubts that the shocking images on cigarette packs, which are also under consideration in the European Union, will have much effect on the majority of addicts. However, the images may still dissuade nonsmokers from taking up smoking, Onur said.

The study was funded by the German Research Foundation.

Pass it on: Scary images on cigarette labels may not deter smokers from lighting up, a study suggests.