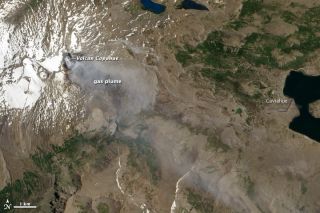 Officials in Chile and Argentina ordered more than 2,500 people to leave their homes as Copahue volcano threatened to erupt on Monday (May 27). The volcano is at red alert status, meaning an eruption could be imminent, according to Chile's Geological Survey. The volcano has erupted several times in the past 100 years, and has been spewing steam and ash on and off since Dec. 22, 2012. Towns near the 9,833-foot (2,997 meters) summit could be hit by fast-moving lahars (a debris flow of water and volcanic rock), volcanic bombs and lava flows. A YouTube video posted yesterday shows a helicopter's view of the steam column pouring from volcano.

While Copahue has a history of small steam eruptions, this week's activity also includes increasing seismicity called volcanic tremor. These tiny rattles, accompanied by deformation at the surface of the volcano, indicate magma is rising inside Copahue, according to a statement from Chile's Geological Survey. Copahue's crater also contains an acid lake, with a pH as acidic as stomach acid. The lake dried up during the volcano's last big eruption in 2000.