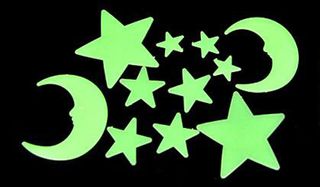 What do most Halloween haunted houses and planetariums gift shops have in common? They're chock full of stuff that glows in the dark, from scary masks to plastic stars to stick on your bedroom ceiling. But why is it that many of these objects glow green?

While there are potentially many colors that might be used to make phosphorescent (or glow-in-the-dark) items, yellow-green is by far the most popular and most common color . Part of the reason lies in the color's inherent eeriness: for some reason, people find green creepier in haunted houses than, say, blue or yellow. (This ickiness factor of the color green extends to other toys as well, such as green slime.)

But the more scientific reason green is such a popular color is that most phosphorescent items things that absorb energy, in this case, light, and slowly re-emit that energy as light are based on the same chemical phosphor: zinc sulfide. This chemical is usually mixed with other chemicals that make it more stable and versatile for use in paints, plastics, and other applications.

Zinc sulfide is non-toxic, relatively cheap to produce (thus making it perfect for inexpensive toys), and happens to naturally glow that distinctive green color. Toy manufacturers could (and sometimes do) add other colors to the phosphorescent zinc sulfide base, but the result is often less bright and doesn't last as long as the good, old-fashioned green glow.

Benjamin Radford is deputy editor of Skeptical Inquirer science magazine and author of Scientific Paranormal Investigation: How to Solve Unexplained Mysteries. His Web site is www.RadfordBooks.com.